What are Crucian Carp? – Identifying & Catching Them 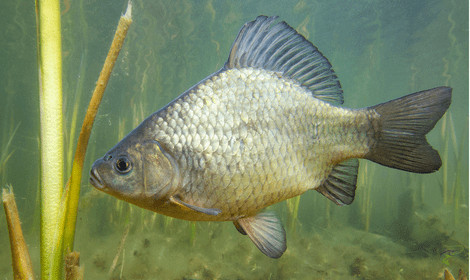 Carp fishing is growing in popularity consistently over the years, with millions of anglers heading to the banks regularly to try and put some carp in the net, especially in the UK and Europe.

There are many commercial day ticket venues that are heavily stocked with types of carp where anglers can pay for a day catch and release ticket.

These waters are usually well stocked with types of carp, with the common and mirror carp being the most popular.

These fish can grow to massive sizes, well over 30 lbs in the correct environment.

These commercial fisheries will also commonly stock other carp species, such as the F1 and crucian carp.

For beginner anglers, you will need to learn to differentiate between all these types of stocked carp.

I’ve already written posts on the common, mirror and f1 carp, so today, I’m going to take a look at the crucian carp.

So, what is a crucian carp?

What are Crucian Carp?

The Crucian carp is a relatively small member of the carp family and will not grow anywhere near to sizes of the common and mirror carp.

They are known to be exceptionally wary fish and tend to hide away from angling pressure.

They have humped-back bodies and can even grow to shapes that are taller than they are long. This is thought to be a method that they have developed to help limit predation, as although they are not large, fish predators may not be able to fit them in their mouths.

As these deeper and taller fish generally are less susceptible to being eaten by predators, these tall breeding fish will pass their height onto offspring over the centuries they have developed this tall and hump-backed shape.

Like other carp, the crucian carp can be found in rivers, ponds, reservoirs and nearly any freshwater aquascape across the world.

They are widely distributed across Europe and can be found as far north as the Artic circle in Scandinavia.

Crucian carp can survive in waters with critically low oxygen levels that the majority of freshwater fish have no chance of survival in.

In the winter, in cold countries, when the top layers of water freeze, oxygen levels drop considerably but the crucian carp can turn its respiratory system to an aerobic state which means it doesn’t require oxygen to breathe.

It can remain in this state for up to 4 months and outsurvive many other fish species.

The crucian carp can replicate this same feature in very hot summers and even bury itself deep into the mud or silt of the lake to keep cool.

How to Identify a Crucian Carp? 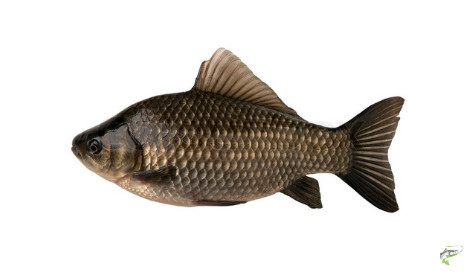 Crucian carp are fairly easy to identify among the other species of carp due to their shape, size, colouration, lack of barrels and mouth that is not downturned like a lot of other carp species.

As I mentioned briefly, the crucian carp is generally a tall fish with a humpback and can even grow to shapes where they are taller than they are long.

It is unlikely for a Crucian carp to grow to lengths of over around 15 inches and heavier than 2kg.

The Crucian is known for its golden/bronze colour. They can also take on the colour grey/green and change colour throughout their life span.

Common and a few other types of carp species have two barrels protruding from their downturned mouth that are used to taste foods on the bottom, but the crucian carp do not have these.

They do not have a downturned mouth, but they will feed on the bottom.

How Big Can a Crucian Carp Get?

It is unlikely for a Crucian carp to grow to lengths of over around 15 inches and heavier than 2kg.

Let’s take a look at some word record crucian carp to indicate how big these fish can grow in certain climates.

The crucian carp record in the UK correctly stands at 4lbs and 11oz which beat the old record by only 1oz.

Although the goldfish is a species of carp and most likely closely related to the crucian carp, they are in fact different species.

The Crucian carp has the scientific name of “Carassius carassius”, and the goldfish is “Carassius auratus”.

This suggests that the crucian and goldfish are closely related, but there are differences in their appearance and make-up that may not be all that evident at first glance.

Some of these differences are:

So, although crucian is closely related to the goldfish, they are not the same species, and there are a few distinct features such as the ones listed above.

No, crucian carp are not rare across the world, but in some areas, true crucian carp may be becoming rarer than other fish due to their breeding with other carp species to create hybrid fish.

They are generally abundant across the UK, Europe and parts of Asia, and they are not classed as a threatened species by the “International Union for Conservation of Nature”.

How to Catch Crucian Carp? 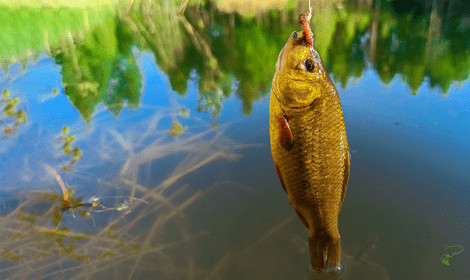 Crucian carp are fond of some top carp baits that can be used for larger carp species, such as soft pellets, maggots and sweetcorn.

One thing you should keep in mind is as crucian carp are very wary and smaller than other carp sizes, your hook bait size should be small, and your tackle set up light.

Crucian carp are commonly found in shallow venues with a lot of vegetation, and the best way to target them is usually by float fishing with a very light waggler, light line and a small hook.

When float fishing for these fish, it is best to fish the hook bait resting on the bottom, so you’re going to need to set the depth of your float accurately to ensure sensitive bites are going to register on your float.

You can plumb depths for this by attaching a plumb to your hook, and casting to the area you want to fish. If the waggler sinks completely, move it up the line. If it floats, move the waggler closer to the hook.

Keep casting until the depth is perfect, with only the red of the waggler sticking out of the water.

Crucian carp will usually gather very close to the margins and weeds, so don’t worry about not having any weight in your rig for casting distances.

You should use a light waggler rod with a small reel usually around 4lb fluorocarbon loaded.

You should also use small hooks of 10-16 to tailor to the small fish and their smaller mouths.

Unlike fishing for larger carp species, you should avoid prebaiting or heavily baiting your swim, and only a very light scattering of bait will be needed to encourage the fish to feed when you start your session.

This is due to these being extremely easy to overfeed.

You should now know what crucian carp are and how to catch them.

Crucian carp is essential a small subspecies of the carp family with tall bodies that commonly only grow to sizes below 5lbs although larger specimens have been caught.

If you’re interested in catching crucian carp, then the best way to catch them is by using a light waggler set up with a single hook bait of sweetcorn, maggots or soft pellets.