Where Do Carp Live? 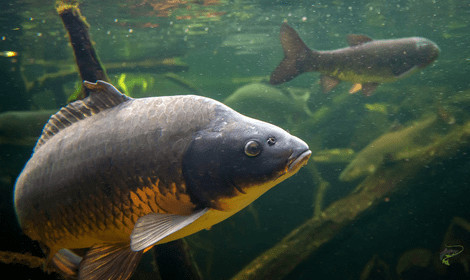 Carp are common across the globe, and there are species of carp in nearly every continent apart from the poles.

Due to this, there is likely a species of carp swimming in waters in your country.

In some places, such as the UK and Europe, carp are regarded as a sport fish, and millions of anglers will take to the banks to fish for them every.

They grow to massive sizes and can be challenging to catch, making for great sport.

If you’re new to carp fishing or are generally just interested in finding where carp live, then you’re in the right place.

So, where do carp live?

Where Do Carp Live?

Carp are a freshwater species of fish and can be found in almost any freshwater area. This includes lakes, ponds, rivers, small streams and canals.

They can survive in both still and flowing water and usually inhabit areas with a lot of aquatic vegetation and weeds where they will find plenty of natural food and cover where they feel safe.

Although carp are generally found in lower altitude fresh water, they are also known to live in brackish waters such as lower areas of rivers.

Brackish water areas are where the salt water from the sea meets freshwater, and the salt content will be between freshwater and saltwater.

Carp can tolerate environmental conditions in which many freshwater fish can’t survive.

They can live in bodies of water with low oxygen levels, pollutants and even extremely dirty ponds, which make them hardy fish.

Where To Find Carp?

Although carp can be found in nearly all freshwater environments, there are areas that they prefer and can usually be found near.

If you’re looking to take up carp angling as a hobby, then it can be beneficial to know where these areas can be.

Carp are bottom feeders and spend around 40-50% of their time searching for food on the bottom, but they will also feed in nearly all layers of the water, including the surface.

Commonly, carp can be found near the margins looking for natural food sources, hiding and feeding in weeds or lilly pads and also near any snags on the water such as overhanging or fallen trees in the water.