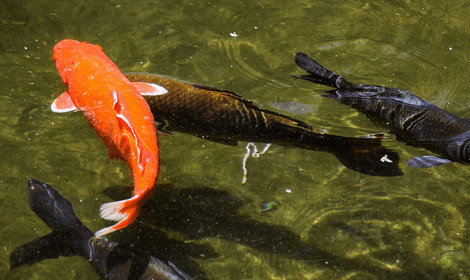 Carp can grow to unimaginable sizes that dwarf the native fish swimming in a lot of waters, it’s no wonder that carp fishing is becoming increasingly popular across the world, especially in the UK and Europe.

Day ticket commercial fisheries are common where carp anglers can pay a one off permit price to fish venues for many species of carp stacked in the water.

Commonly, these waters are stocked with common carp, mirror carp, F1 carp, crucian carp and occasionally a few other types of carp such as leather and koi.

Differentiating between each type of carp should be fairly easy with little knowledge.

One type of carp that I’ve heard a few anglers question is the “goldfish”.

Goldfish are commonly kept as ornamental fish in aquariums and tanks in homes, and some anglers believe that these small goldfish can grow into the large carp that stock commercial venues.

This is not necessarily the case.

So, are carp big goldfish?

No, the carp you’re catching in commercial venues are not generally classed as big goldfish and are usually carp species such as the common and mirror carp.

Typically, mirror carp will be the most common to catch as they are more commonly stocked due to their ability to grow to larger sizes as they expend much less energy growing full bodies of scales and put this energy into growing in overall size and weight.

So, if goldfish don’t grow into the big carp we usually catch while fishing then what are they?

Goldfish are in fact, a species of carp, and they do have the ability to grow to large sizes, but it is unlikely to come across one of these carp subspecies while fishing.

Goldfish were originally bred and domesticated from the Prussian carp, a small, fully scaled carp species that looks similar to crucian carp with deep bodies.

The selective breeding during the domestication of this fish over many years created the signature deep orange colour of these fish, but they are not always this orange colour. They can take on red and yellow colours.

Unlike the common and mirror carp, they don’t have barbels and also don’t have a noticeable downturned mouth.

So, the carp you will usually catch at commercial fishing venues are not large goldfish, but the goldfish is a domesticated species of carp but not one that is usually stocked for anglers.

The goldfish do not have the capacity to grow to the massive sizes that common, and mirror carp can grow to, but if they are stocked in large bodies of water with good water quality, they can grow in excess of up to 5lbs.

In the US, goldfish have become an invasive species and in the great lakes and other parts have the world has become a real issue for native fish.

These large goldfish populations are likely due to pet owners releasing their goldfish into the wild, where they can grow to large sizes and interbreed with the carp population.

So, although goldfish are a type of carp and can grow to sizes over 5lbs, they are a separate species, and the type of carp anglers commonly come across while fishing is not just large goldfish. 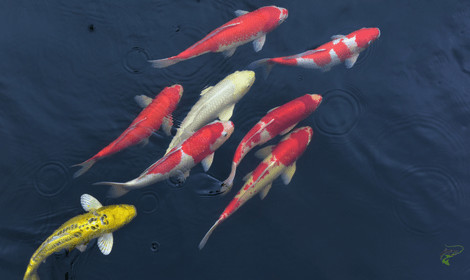 Sometimes, large golden-coloured koi carp may be stocked and caught at fishing venues that anglers may mix up with the smaller carp species, the goldfish.

Although these koi carp may have the same colourations as goldfish, they are a different carp species originating in Japan as ornamental fish.

These fish were selectively bred over centuries to give them the vivid colourations and patterns we see in Koi today.

Usually, these fish can be easily differentiated from the smaller goldfish carp as they have barbels below their mouth. Still, if you only glimpse a solid-coloured koi swimming in the water, some people may think they are just large goldfish.

Ogon and Chagoi are both koi types with solid gold/yellow colours that may be mixed up with goldfish.

Carp species are not just large variations of the colourful goldfish commonly kept as pets in tanks and aquariums, but the goldfish is a species of carp on its own.

The carp stocked in venues for anglers to catch are usually common, and mirror carp, but you may be lucky enough to come across large colourful koi swimming in these venues that can have the same colouration as goldfish.

These koi carp are also not large goldfish and are their own subspecies bred by the Japanese from the common carp over centuries.

So no, carp are not large, fully-grown goldfish.