F1 Carp – How to Identify and Catch Them? 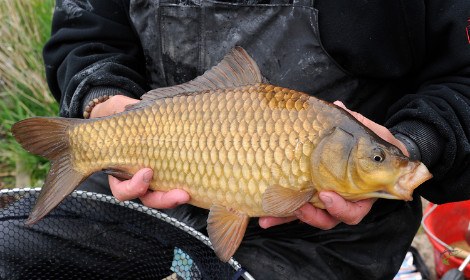 The world of fishing holds a universe within itself. Every fish species has some curious characteristics, some specific techniques make them bite faster and harder, and some physical features that set them apart from other species. Today, we’ll discuss the F1 Carp and everything that sets it apart from other carp species.

The F1 Carp is quickly becoming the most commonly stocked carp in most commercial fisheries. Because of its fast growth, medium build, and strong immunity, this fish is a favourite among most stockists.

If you’re a seasoned angler, the chances are that you know what a hybrid F1 carp is. But do you know all about it? It’s quite an exciting fish to study because not only is it strong and fun to catch, but it also has some features that make it a better catch than common carp. So, what are we waiting for? Let’s dive in.

Also known as the Hybrid F1 Carp, this carp species is a cross between Common Carp and Crucian Carp. Fisheries all over Britain breed this carp for its unique qualities that make it an excellent species to stock in reservoirs, etc.

F1 Carp is sterile because it is a hybrid offspring of two different carp species. Carp anglers fishing in commercial fisheries catch a lot of F1 Carp because it is easy to stock. It strongly resembles the Common Carp, allowing traditional anglers to feel at home while fishing them.

They are invertebrates and usually feed on insect larvae, aquatic plants, and some small invertebrates like most other carp. Anglers usually catch them for sport only and don’t tend to target them for food.

How To Identify An F1 Carp?

It is very easy to identify an F1 Carp. It has a hunched back appearance like Common Carp and medium weight. They typically weigh 2-4 lbs, with some fish even going up to upwards of 10 lbs.

F1 carp is golden-coloured like the Crucian Carp. However, its body shape is closer in appearance to the Common Carp, but unlike the Common Carp, it does not have the four barbels that the Common Carp is widely recognized by. Instead, it only has two very small barbles that most anglers find challenging to spot.

While the F1 carp is known for its ability to feed in the winters and the summers, it is at its most active in the spring and summer. In the summers, they are aggressive feeders and will bite on almost anything.

Many anglers hold competitions in the summers in which the angler with the most F1 carp will win. Carp anglers can even catch up to hundreds of lbs ofF1 Carp in one day in such competitions.

In the winters, anglers get bites when they fish during the daytime and in the warmest hours, such as in the afternoon. 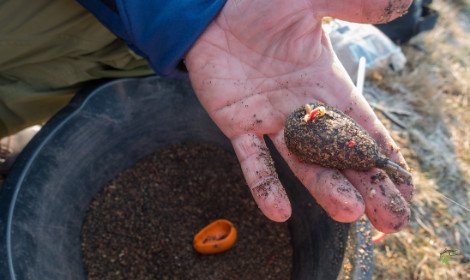 Why is this? Well, the small feeder and bait that you can attach to light feeder rods attract even the most cautious of fish to bite. In addition, the lines have small diameters which do not unnecessarily scare the carp.

Summers are the best times to catch F1 Carp as they aggressively feed in that time, but they are also good sport in the winters. So it is essential to use light rigs in the winter.

Some anglers use small hooks because they believe that F1 Carp are small-sized fish and will not bite large hooks. However, they usually fail in catching any F1 carp. Why is that?

It is because when they use small hooks, they tend to slip when they retrieve the line.

4mm/6mm pellets paired with a size-18 hook is an excellent rig to catch F1 carp.

F1 Carp are huge fans of sweetcorn and double maggot bait. Other attractive baits to catch this type of carp are doughballs, bread, and maggots and worms.

Anglers can make their bait look more attractive by using one red maggot and one white maggot when casting the bait.

Why Do People Breed The F1 Carp?

Many fisheries stock F1 Carp because it is an ideal fish to breed artificially. Why is that? Let’s find out.

There are several reasons why F1 Carp make stocking fish a hassle-free experience, but the most important one is that it feeds in the winters. Most commercial fisheries want anglers to fish in their waters throughout the year.

Another reason is that it is also an excellent choice for carp fishing in the summer months. They feed voraciously and around the clock. Anglers hold fishing tournaments in which the main aim is to catch as many F1 Carp as possible.

They are also immune to the Koi Herpes Virus (KHV), a virus that causes a significant degree of mortality in species related to the Common Carp. A KHV infection usually spelled trouble for owners of commercial fisheries because it meant an 80-100% mortality rate in infected waters.

There have been concerns about using this fish to stock reservoirs and lakes in recent years as it tends to mate with the Crucian Carp. However, it is sterile, so it does not produce any offsprings, leading to a decline in the Crucian Carp population. Some fisheries do not stock them because they find it hard to maintain their population in their waters.

Coarse fishing is one of Great Britain’s most common pastimes. Every year, loads of anglers head to tackle stores to stock up on the latest rigs, bait, and other equipment that they’ll need to catch some good fish.

So, to stand out among the scores of carp anglers trying their hand at catching carp across the country, one needs to brush up on all the different types of carp and what they do.

Are you wondering why you need to learn about F1 Carp to improve as a carp angler?

Well, a carp angler is someone who knows all about the different species of carp — not just effective techniques on how to catch them, but also all about their habits, behaviours, and habitats.

4 responses to “F1 Carp – How to Identify and Catch Them?”