Common Carp – How to Identify and Catch Them? 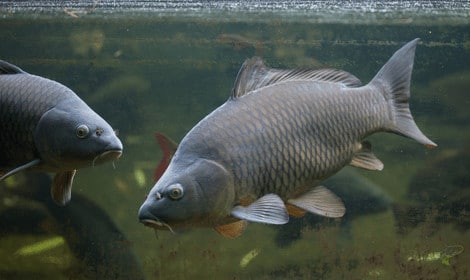 If you’re an aspiring carp angler looking to take up the sport and join the millions of people across the UK and Europe fishing for these fish in their spare time, then you better believe you need to know what a common carp is.

Common carp can be found stocked in nearly every carp fishing venue across the UK, and you can even come across them in the “wild” if you know where to look.

In this post, I will focus on the background of the common carp and some simple methods and tactics for getting your first carp in the net.

What Is A Common Carp?

Common carp or “Cyprinus carpio” are members of the Cyprinidae family native to Europe and Asia.

With the abundance of common carp in fisheries across the UK, you would assume that this species of fish is native to the UK, but this is not the case.

Carp were imported to the UK between the 12th and 15th century (it’s hard to find a definite date) as a food source.

It is thought that these carp were initially brought in by monks, who kept them in ponds at monasteries, growing them to large sizes ready to be eaten.

The white flakey meat of the common and mirror carp was seen as an extremely high-value food and was kept within the monk community and not available to the masses.

This began the proliferation of carp species across the UK.

It is thought that some of these fish were released or escaped into rivers or lakes, which began the birth of the “wild” carp population across the UK.

Carp are now fairly common in freshwater bodies across the UK but nowhere near as common as in the US and other European countries.

The sport of carp fishing kicked off in the UK around the 18th century when innovative fishery owners started importing large hard-fighting fish from Holland and Germany.

Within this time it was mainly imported mirror carp, with less common carp stocked into fishing ponds and venues.

Due to the sheer size of these fish, the elusive nature that made them hard to catch meant anglers came from far and wide to try and hook into one of these fish.

As the carp buzz started, more and more carp fisheries opened across the UK, giving way to the massive carp angling sport in the UK today.

How To Identify A Common Carp? 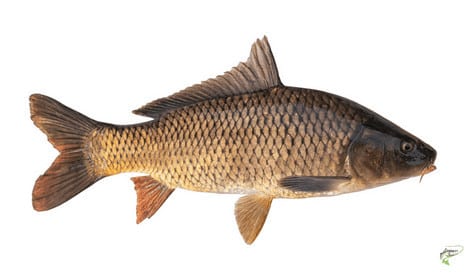 It can be extremely easy to identify common carp.

Considering these fish have “common” in their name, you would expect them to be the most common fish stocked in fisheries.

This is, however, not the case; most fisheries now choose to stock large quantities of mirror or f1 carp, so hooking into an extremely large common can be a challenge.

The common carp can grow to weights of over 40lbs in the UK where conditions are right.

Common carp are covered in regular scales ranging from grey to bronze in colour.

They have four barbels and a large elongated dorsal fin that runs down around half the length of their back.

They have large downturned mouths that are primarily designed for bottom feeding where they will root around on the bottom looking for any foodstuffs that they deem edible.

You can fish for common carp all year round; however, different seasons will prove more productive than others.

As the water temperature rises and falls throughout the year, the activity of the fish and how much they feed will vary massively.

When the water is at its coldest in the winter, the fish enter a sort of hibernation state where they will massively reduce their energy expenditure and, therefore, their feeding.

It is common for carp and other carp species to only feed once every day, usually around midday in winter, the warmest part of the day.

Spring and Autumn are often classed as the best times to catch common carp in the UK, and if you are new to fishing, then you should give these seasons a go.

Carp will also be extremely active over the summer when the waters are at their warmest, but you will find that commercial venues are extremely busy and the fish are under a lot of angling pressure which can make them harder to put in the net.

Many dedicated carp fishing rigs can target all sorts of carp such as the common carp, mirror carp, crucian carp and any other member of the carp family swimming in the venue you are fishing.

I’ll give you a quick breakdown of some of the rigs you can use to target these fish if you are looking to fish for common carp.

The method feeder is a fairly common method for catching carp and allows you to present a small mound of carp bait on the bottom with your hook bait presented within.

Anglers will make a mixture of groundbait or micropellets to mould around their feeder using a small rubber mould.

This is a great method for (hopefully) attracting hungry fish into your swim, where they feed on the small pile of free carp bait in the hope they will pick up your hook bait. 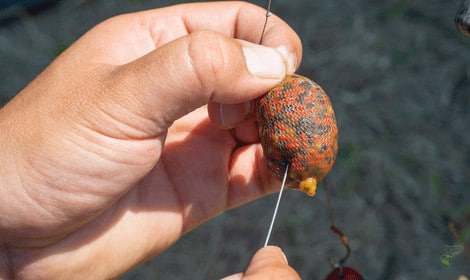 PVA bags are slightly similar to method feeders as they allow you to present your hook bait on the bottom with the addition of some free carp baits.

PVA bags allow you to feed larger chopped boilies, larger pellets or basically any other dry carp bait you can fit in them.

Once the PVA bags hits the water, it will start to dissolve, dropping out the free baits.

Float fishing for carp can provide one of the most fun methods for catching these fish. Float fishing is also great for beginners, as it has many similarities to the beginner style of fishing featuring floats or bobbers to detect a fish on your line.

But, float fishing is a viable tactic for even the seasoned carp angler.

This method of carp fishing allows you to fish with a bait suspended in the water at whichever depth you find the fish to be feeding at.

Although carp are classed as bottom feeders, they don’t always feed on the bottom, and if conditions are right, it can be far more worthwhile to fish up in the water.

Common carp can be caught will all conventional carp baits such as sweetcorn, boilies, and pellets. Other attractive baits to catch this type of carp are bread, maggots and worms.

Coarse fishing is one of Great Britain’s most common pastimes. Every year, loads of anglers head to tackle stores to stock up on the latest rigs, bait, and other equipment they’ll need to catch some good fish.

So, to stand out among the scores of carp anglers trying to catch carp across the country, one needs to brush up on all the different types of carp and what they do.

A successful carp angler knows all about the different species of carp — not just effective techniques on how to catch them, but also all about their habits, behaviours, and habitats.