What is a Mirror Carp? – Genetics, History and More 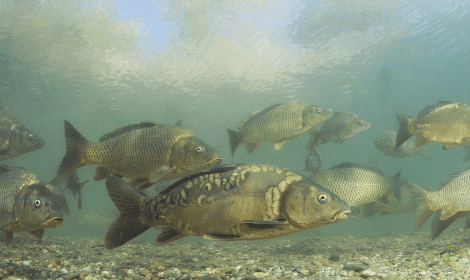 What is a mirror carp? A mirror carp despite what many people think is the same as a common carp, but with a genetic mutation that affects the scales.

Instead of having evenly placed and sized scales like a common carp, mirror carp have irregular, large scales that resemble mirrors “hence the name”. Let’s look at the history of the mirror carp, its habits, and the reason for this scale pattern.

Compared to a common carp, the mirror carp has a genetic mutation that is responsible for the large “mirror” scales. I don’t really know much about genetic mutation, “I just fish” but according to research, this genetic mutation is due to two alleles or forms of a gene.

These gene forms are noted as S and N alleles, the genetic coding is as follows SSNN all of which are recessive genes, and this is responsible for the scale difference compared to the common carp, with even, regular scale patterns.

These anatomical differences, again, boil down to the same reasons as the scales, it’s simply genetics after being bred and raised in ponds for hundreds of generations, in comparison to the wild variety of carp, with a larger genetic pool as well as habitat differences. 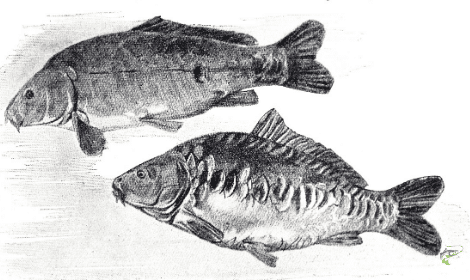 The first official records of the European carp go back to 1227, and these records come from Austria. The Austrian nobility was urging for the stocking of carp into their estate’s ponds and castle moats for consumption, as it was considered a delicacy, but only one that the rich and powerful could enjoy at the time.

Over time the farming of carp spread throughout the European continent, with more and more ponds and other bodies of water being stocked to raise the fish. This also coincided with the clergy stocking them as well, with monks stocking carp in their monastery ponds for raising.

Due to the carps large and numerous scales, cleaning the fish prior to consumption was a difficult task, so as a result, the monks started pulling the scales off of the living fish as they grew to make this task easier when the time came to harvest them.

As this process of removing the scales from living carp was repeated for generations and centuries, and the carp continually breeding in these ponds and keeping the same genetics throughout this entire time, the genetics of the carp changed to the point where they were hatched with the scale change, and instead of having numerously evenly place scales that we are familiar seeing on the common carp, they instead had the large scales that only cover portions of their bodies.

Carp were first brought to England in 1496, and had already become a widely available food source in the rest of Europe and was not just exclusive to the nobility and wealthy, and as the standards of living around Europe and Great Britain grew, so did the demand for mirror and common carp.

This demand followed Europeans to the new world, and during the 1800s carp were transported across the Atlantic and promptly stocked in ponds and to the detriment of native species, natural waterways.

Contrary to what many people think, mirror carp are not the same as leather carp, leather carp being virtually scaleless. There are like with common carp and mirror carp, a genetic difference between these fish, and leather carp are extremely rare and are a sought-after prize among the carp fishing world.

Can Mirror Carp Grow Their Scales Back?

There has been a study by the Proceedings of the Royal Society that has shown that mirror carp may be able to over generations grow their scales back. 100 years ago a body of water in Madagascar was stocked with mirror carp, over time these carp have shown signs of scale growth that appears to be regressing back to the common carp, suggesting that over time, they may make a full change back to their original scale pattern.

Mirror carp can be found throughout Europe just like common carp are, and the same applies to North and South America, any place where you can find common carp, you are likely to find mirror carp.

Mirror carp are incredibly tolerant of a wide variety of conditions, and this is the reason that mirror carp have been able to establish populations around the globe whether they were purposefully or accidentally introduced.

Mirror carp prefer large bodies of water that are slow-moving with large quantities of vegetation and a softer bottom make up.

Mirror carp as mentioned earlier are incredibly adaptive and tolerant. They can tolerate low oxygen levels that other fish would struggle or die in, and will have little issue surviving under the ice of small ponds granted that it doesn’t completely freeze out. Mirror carp are more than happy in water temperature ranges from 3-35 degrees C. they can also inhabit brackish waters that few freshwater fish would be able to survive in for any extended period of time.

A full-grown female Mirror carp can lay up to 300,000 eggs in a single spawning session, and although the typical spawning season is in the spring as water temperatures warm, they can also spawn multiple times throughout the warm water period and even into fall with the right conditions, these conditions could be rising water temperatures, or increased rainfall.

In larger bodies of water with plenty of preferred habitat and forage, mirror carp can grow to very large sizes and match that of the common carp, with maximum weight ranging up to 88 pounds and coming in at 45+ inches in length.

Mirror Carp can also live for a long time with the oldest recorded carp being 38 years old, but this was in a captive scenario and 20 years of age is much more common for a carp.

Though a mature female carp can lay up to 1 million eggs in a single year, the population numbers for a body of water remain stable, this means that nearly as many eggs do not live and the vast majority die before hatching, this is due to multiple environmental factors, like predation, fungi, and certain types of bacteria killing the eggs. Carp eggs that do successfully hatch are then susceptible to predation from pike, perch, and other fish as well as birds.

The largest mirror carp caught by rod and like weighed a whopping 112 pounds and was caught in Hungary at the venue Euro Aqua. With that being said, these fishing venues aren’t really a fair way to judge wild fish size, as they are known to feed the fish vast amounts of food regularly to boost their sizes beyond what would be available in the wild. 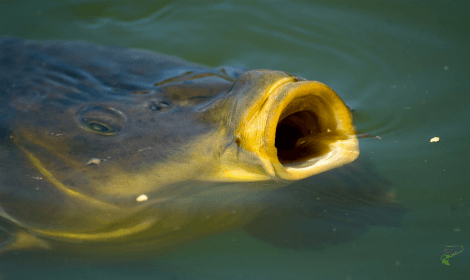 Due to being such opportunistic feeders, and having the ability to eat such a wide variety of different things, Mirror carp can grow very large in habitats with food sources that can be drastically different from others in these bodies of water, and is another reason that they have thrived in non-native waters around the globe.

Carp have very interesting and in some ways mind-blowing tools when it comes to finding food and feeding. We have an entire article on exactly how it is that carp find food and eat it.

Fishing for carp in general, whether they are mirrored or not, is very popular in Europe and has emerged as one of the most sought after sportfish. Tournaments are common, there are even professional anglers who dedicate their lives in the pursuit of big carp.

Anglers employ a wide variety of rigs, bait, and tactics to catch them. You can find many detailed articles on this site dedicated solely to catching carp, and the baits and rigs used in the process.

While there are dedicated carp anglers throughout North America, the community is much smaller when compared to Europe as it is not a sought-after sport fish due to its invasive nature, and in some states releasing a carp back into the water that you caught it from might even be illegal.

What is a mirror carp? Mirror carp while having drastically different scales compared to a common carp is essentially the same fish.

For me, the history of the mirror carp is incredibly interesting, the genetic modifications that occurred as a result of monks raising fish in ponds and those effects still lasting to this day allow anglers to hold a piece of living history.

2 responses to “What is a Mirror Carp? – Genetics, History and More”