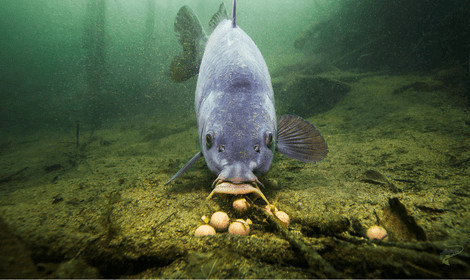 If you’re new to carp angling, then you’re going to need to spend a lot of time researching the fish and the specialised method that anglers use to catch them.

Carp are known for being hard to catch, and carp fishing is far different from other types of angling, with carp showing their own set of distinct behaviours under the water.

This can be anything from how they react to external weather parameters, the seasons, where they like to reside in the water and also what foods they choose to feed on naturally.

By building up as detailed pictures of the behaviours of carp themselves, you set yourself in good stead to become a successful angler.

Knowing what carp choose to eat daily can help you understand why certain carp baits are used.

Today, I’m going to be discussing the carp of a diet to outline if they are omnivores or not.

So, are carp omnivores?

Before we get to the bottom of this, I’ll first describe a little about what criteria will need to be included in carp’s diet to make it classed as an omnivore.

An omnivore refers to an animal that can survive on both animal and plant matter.

These varied diets allow them to obtain energy and nutrients from plant and animal matter. To be classed as an omnivore, they need to be able to digest carbohydrates, protein, fats and also fibre and then metabolize the nutrients and energy.

Plenty of animals are classed as omnivores, and humans are one of them.

So, are carp omnivores?

Yes, carp are omnivores and eat both plant and animal matter. They are classed as opportunistic and, depending on the lake or body of water it lives in will adapt the food it consumes to make sure it gains enough energy to grow healthily.

Unlike many other omnivores, they have stomachs that mix and break down food sources and absorb some nutrients before passing them to the lower intestine.

Carp on the other hand, don’t have stomachs and instead have long intestines, which are longer than the length of their body.

Due to this, carp need to graze on food constantly, and this is why a constant supply of bait can work well in your fishing approach.

Now that we’ve established that carp are omnivores, what exactly do they eat.

What Do Carp Eat?

Carp eat anything from fish eggs, dead rotting fish, snails, and small crustaceans such as freshwater shrimp, crayfish, amphipods, and others.

They also feed on various waterborne insects, such as mayfly larvae, caddis fly larvae, other insect nymphs or whatever insect happens to be in the wrong place at the wrong time when a carp happens to be feeding over them. Other food sources like worms, plants, and algae are also common forage for carp.

Being an opportunistic feeder than can feed on such a wide variety of food means that carp can grow big in varying habitats with food sources that can be drastically different from others, and is part of the reason they have proliferated in other parts of the globe as invasive species.

In the winter months, food gets scarce, as many food sources like eggs and bug hatches diminish or disappear entirely. This is one reason all winter fish go into an energy-saving state, expending as little energy as possible, moving and feed very seldom.

Carp in the winter months can also subsist on the remnants of plant matter as well as other organic matter like dead and decomposing fish or animal matter on the lake floor, as long as it is far enough along in decomposition, enough to allow carp to feed on small pieces of the matter.

Carp are in fact, omnivorous and will feed on both plant and animal matter, including insect larvae, nymphs, algae, and decomposing organic matter that can be found on the bottom of the lake.

Usually, though, most baits are made up of proteins and oils, which are most likely going to be animal-based with the likes of fish meals.