What is a Koi Carp? – History, Breeding and More

Most people are familiar with the koi carp. And usually, the name of the fish produces a mental image of stone-lined ponds in a picturesque setting that is filled with bright and colourful fish. Koi carp definitely have an interesting history and lineage. In this post, let’s take a look at the history, anatomy, and habitat of the koi carp.

Koi carp are simply a coloured variety of the Amur carp, which is native to the regions of Laos, China, and Vietnam, up to the Red and Amur rivers, the latter of which forms the border of modern Russia and China. Thus, when talking about the biology and habitats of the Koi carp, the same can essentially be applied to that of the Amur carp.

The Koi and Amur carp were in times past considered a sub-species of the widely spread common carp, but in modern times they are treated as a separate species.

The fish was used in aquaculture in China starting in the 6th century B.C., with Jin dynasty texts describing fish of various colours.

When it comes to a region of the world that’s synonymous with koi carp, Japan is the first place that most think of, and the first mention of koi carp in ancient Japanese texts is found in the Japanese history book Nihon Shoki or (Chronicles of Japan) which was written in 720. This mentioning of the koi carp describes Emperor Keiko praising the koi carp he observed in a pond in the Mino region in the year 94 A.D.

Koi, as you may already be well aware, are known for their intense colours of orange, black, and white, red, silver, gold, and golden yellow. At times these colorations even appear almost fluorescent in nature.

When the koi fish or Amur carp was transported to areas, natural coloration variations occurred to some extent naturally, as with many other types of fish species living in different regions. Prime examples of this can be seen in fish like perch with different variations in colours and markings when comparing perch from North America to Europe.

Systematic Breeding of The Koi Carp

Systematic breeding, specifically as an ornamental fish, began in Japan in the 1820s. This selective breeding gave rise to popular and known variations of koi such as the yellow, red, and white Bekkou, pale blue Asagi, and the first red carp variants.

Other colour variations of the koi carp, such as the silvery metallic Ogon koi, were bred relatively recently, but all colour variations to this day stemmed from the original pool of genetically modified koi mentioned above.

The rest of the outside world was unaware of these ornamental fish due to the isolationism of pre-modern japan before the Meiji Restoration, and it wasn’t until 1914, when they were exhibited at an exposition in Tokyo, that the outside world had an open view to them.

If you want to learn more about breeding of real Koi in Japan I would highly recommend watching the video below;

Koi In the Wild

Koi have been accidentally and deliberately released into wild environments around the globe. These introductions can be the cause or natural reasons such as flooding, allowing fish to escape from ornamental ponds into natural waterways, or by owners of the fish no longer wanting them and releasing them into waterways as an easy way of getting rid of them.

These introductions have become so widespread that there have been koi found on every continent on the planet, with the exception of Antarctica. And like with other invasive species and the same as with common carp, this creates many problems for the ecosystems they are introduced into.

Koi, in the same manner as other carp species in non-native environments, cause a massive increase in turbidity by constantly stirring up the substrate of a body of water in search of food.

This turbidity makes waterways dirty and stained in colour and decreasing the native vegetation as well through foraging and lack of sunlight penetration, and can even make the waterways unsuitable for recreation or drinking, even for livestock.

In some countries, massive and expensive programs to remove Koi from these waterways have been undertaking, but in most cases, these programs have been unsuccessful.

When breeding naturally, koi carp spawn in the spring and summer months, and on average, after spawning, if the eggs survive for 4-7 days, they typically will hatch, although the number of surviving eggs and fry are very low due to predation, even from other koi.

In artificial breeding to produce preferred colorations for ornamental koi, the vast majority of thousands of fry actually do not result in wanted colorations and will be even be deemed defective. This is much different than the selective breeding of other animals such as cattle or purebred canines.

The culled fry that do not exhibit desired colour patterns are typically used as feeder fish and are commonly used to feed other exotic aquarium fish such as Arowana, while larger undesired koi are usually sold as pond fish at much lower prices.

In China, the affluent and wealthy have been increasingly purchasing ornamental koi from Japan, with rising popularity in having koi ponds at elite estates and homes.

Another region where fish ponds are popular is Sri Lanka, with many courtyards now featuring ponds with the ornamental koi fish.

According to the Zen Nippon Airinkai, which is the group that tracks and leads the dissemination and breeding of koi carp in Japan, there are over 100 different varieties of koi carp, all of which are created through artificial breeding and then broken down into 16 different groups.

These groups of ornamental fish are determined by three different distinguishing factors such as colour, scalation, and colour patterns, with the major colorations being black, red, white, blue, yellow, and cream, but ultimately the colour possibilities are essentially limitless.

New koi varieties are still being produced into the modern-day, with one of the most popular koi in the U.K. being the ghost koi, which is a hybridization of koi and the common carp, which first came to prominence in the 1980s along with butterfly koi, which feature long and flowing fins like that of some goldfish or beta fish, and are hybrids of koi and Asian carp.

Goldfish, to many people’s surprise, are derived from a different carp species, and were first developed in ancient China more than a thousand years ago from the Prussian carp species for the same reasons as koi carp, coloration.

Goldfish and Prussian carp are not considered to be separate species with no relation due to thousands of years of genetic modification due to selective breeding.

Koi on the other hand, are still a subspecies of Amur carp, and if allowed to breed freely with no human intervention to produce offspring based on coloration and patterns, will actually revert back to their original coloration after a few generations. 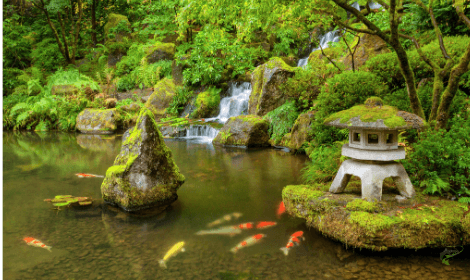 Koi do not respond well to long periods of cold temperatures and prefer temperature ranges from 15-25 C. Ornamental pond construction usually takes climate into account, with depths ranging from a meter in depth for warm weather climates to 5 meters in depth for climates that are subjected to harsher winter temperatures.

One issue with ponds is predation, and the coloration of koi is detrimental to their survival, attracting all kinds of various predators that are attracted to the bright patterns and colours which offer no camouflage.

Animals like kingfishers, raccoons, cats, foxes, badgers, and herons have been known to exploit ornamental ponds to feed on koi fish. As a result, ponds are constructed with deep edges that do not allow birds like herons to stand and stock the edge for koi, as well as fences or other barriers to keep animals like foxes and badgers at bay.

Koi have been reported to live for as long as 100-200 years. One particular specimen known as “Hanako” died in July of 1974. After studying Hanako’s growth rings on a scale, she was reportedly 226 years of age. While koi can live for exceptionally long periods of time, the average age of a healthy and well-maintained koi is typically around 50 years.

Koi are omnivores that feed on a wide variety of forage from peas, lettuce, watermelon, and other fruits and vegetables, and various insects. Most koi food is specifically designed to balance out the fish’s diet, featuring a combination of nutritional materials.

What is a koi carp? The history of the koi carp is a complicated one; this is mainly due to being artificially bred in ponds for thousands of years to resemble a fish that is completely different from its natural appearance. But if left to a natural existence will revert back to its original coloration and appearance. Native habitats don’t really exist for the koi version of the Amur carp, and This makes koi carp unique in many aspects.