When Do Carp Spawn? 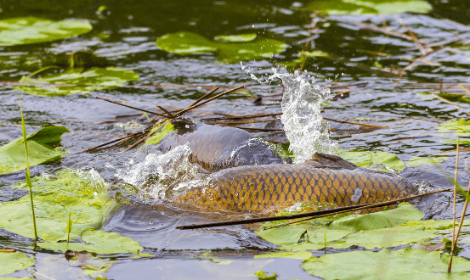 In this post we’re going to take a step back from the posts on purely fishing techniques and take a look at carp spawning behaviours to understand how this can affect fishing when the spawning season arrives.

If you have visited a lake and witnessed the fish splashing wildly in the shallows of the lake then the chances are you have arrived for a fishing session when the carp are spawning.

“Spawning” refers to when the carp are releasing and fertilising eggs for reproduction purposes and a fish of 4kg can produce as much as 1 million eggs.

In this short post we’re going to take a look at;

How do carp Spawn?

When spawning season approach on a lake the carp will head to the weedy, grassy, shallows of the lake where the water is no more than around 2-3 feet deep.

The male and female carp spawn in these shallows by swimming side by side and the female may even have up to 5 or 6 males fertilising these eggs at any one time.

When the male carp are ready to spawn they develop “breeding nodules” on their head and pectoral fins which look like small raised white spots.

The male carp nudges the females with their head and pectoral fins to encourage spawning and the release of her eggs.

As the female gets nearer to the day of spawning and releasing her eggs the activity in the water and shallows grows substantially and the frantic splashes can be heard far from the lake.

When the parameters for carp to spawn rise to sufficient levels the female carp are ready to release their eggs into the water to be fertilised by the male carp swimming alongside her.

These parameters include the water temperature, the availability of food, the amount of oxygen in the water and increased daylight.

The male carp release milt which is basically sperm that fertilises the eggs in the water behind the female. This sperm will last between 30-60 seconds where it must enter and egg for fertilisation.

When the sperm has entered the egg it will absorb water and enlarge slightly and then become sticky to latch itself to underwater vegetation to grow and hopefully hatch.

The amount of eggs released will depend on the carps;

When do Carp Spawn?

When carp spawn will vary on the climate by spawning times usually range from April through to August. Mainly across Europe and other temperate regions carp become sexually mature in two years and spawn in the spring.

Carp prefer to spawn when water levels are rising after periods of heavy rain and the water temperature is over around 18 and 24 degrees Celsius (this will vary in certain areas and climates).

If the water drops below this temperature once spawning has started it is though that the carp will still continue to spawn.

When the water level is rising and spawning has begun the activity on the water will be quite spectacular with plenty of splashing especially around the shallow areas.

This frantic splashing and thrashing of the fish is done to spread the sticky eggs around the underwater vegetation until they fix to something as their resting place to hopefully grow.

Can you catch carp during spawning season?

Typically, a lot of venues will close during spawning season to allow the carp time to reproduce in peace. Quite often though water temperatures don’t rise to adequate levels in this closed season and the carp may still be spawning when anglers return.

So this begs the questions. Can we still catch carp during spawning season?

Typically, fish that are spawning are going to be in no way rooting around looking for food so your chances of catching on these days are substantially reduced.

All hope is not lost though. If you are intent on fishing and not giving the carp time to spawn in peace you may still have a chance.

Generally not all carp in the lake will spawn at exactly the same time so you might be able to hook into some fish that are pre or post spawn.

Typically, pre and post spawn fish are going to be extremely hungry and active and looking for their next protein fix after a few days spawning.

If you time you session just right you could have a brilliants days fishing just before or after the carp spawn on the venue. Unfortunately this is extremely hard to foresee so really it comes down to a bit of luck in most cases.

How many eggs survive?

Although carp lay millions of eggs as you can imagine not a lot survive.

For the first 2 to 4 days the baby carp (fry) eat the yolk sac to provides itself with all the necessary nutrients for survival. At this point the fry is around 8mm long and will begin to actively feed on micro plankton and water fleas.

Unfortunately though in the space of the first 4 days the majority of the eggs will have been eaten by predators such as other fish, crayfish, birds, insects larvae and even the carp themselves.

If the small fry make it past this stage into day 4 the struggle is still not over. The risk of predators still poses as a massive risk as the fry struggles to pack on weight quickly for the approaching winter.

If they make it to spring time growth can happen rapidly and the fry can grow larger and stronger to deter predators.

Carp spawning in the margins and shallows can be quite the spectacular sight but unfortunately if you turn up to the bank on one of these days the chances of you catching a lot of fish is extremely limited.

The spawning carp will definitely not be looking for food but all hope is not lost. If you manage to find some fish in pre or post spawn then you should manage to at least catch a few fish.

I’m sure your question of “When do carp spawn?” has now been answered, but if you have any more questions leave a comment below and I’ll get back to you ASAP.

If you are looking for more reasons on why you might see carp splashing and jumping take a read at my post on why do carp jump? 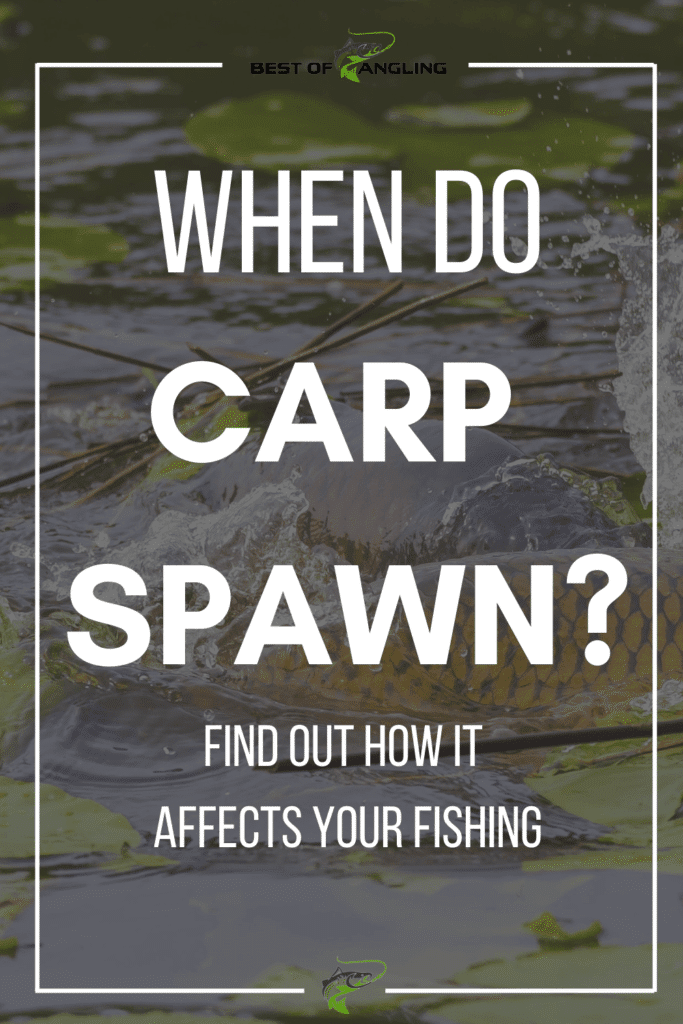