What is a Grass Carp? – Origin, Feeding, Habitat, Spawning & More 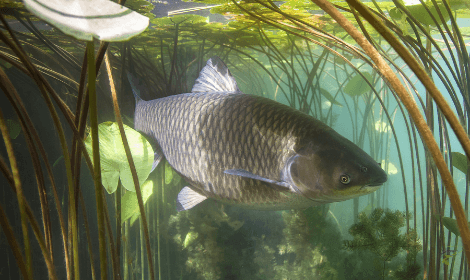 The focus of this post is going to be all about grass carp. Why? Well there’s definitely a greater chance you are going to be able to catch these fish if you know all about their behaviours, feeding habits, the baits they like and you might just find it interesting to know where the fish you love to catch originate from.

Grass carp are also one of the less common species in the UK angling world and a lot of carp anglers might not actually know much about these elusive creatures at all.

So, without wasting anymore time lets get into discussing exactly what grass carp are. The post will be split into 5 sections each discussing a different’t aspect of the grass carp.

These topics will be; 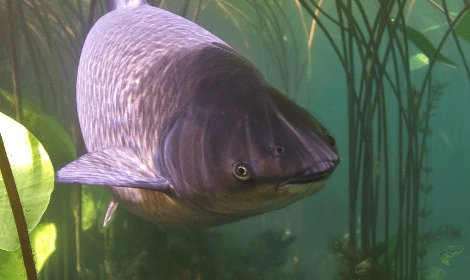 It seems natural to first begin with discussing the origin of the grass carp, Ctenopharyngodon idella if you want to get technical, where it came from and how it ended up swimming in UK waters.

I would’ve thought you would assume that the grass carp is not a native UK fish with the minute wild population but how far they’ve come might surprise you.

Grass carp are native to eastern Asia, more specifically ranging from northern Vietnam to the Amur river, the 9th longest river in the world, on the Siberia-China border.

I’m sure you all know this is a long way from the UK so how exactly did these fish start to appear in the UK, across Europe and even in the US.

The grass carp is still consumed as food in some parts of Asia today but that definitely isn’t why this large carp was introduces across the world.

The main reason this fish was introduced across the world was for aquatic weed control. Unsurprisingly grass carp consume a lot of grass and other vegetation under the waters surface and they can even eat up to three times their body weight daily.

No wonder these fish were introduced into overgrown weedy waterways across the globe.

They were first introduced into the UK on the Lancaster Canal as an experiment into weed control conducted by British Waterways and the University of Liverpool.

Grass carp were also introduced into the United States as a means of aquatic weed control. This could be starting to take a slight turn for the worse as some of these fish have made there way into the Mississippi River and migrated northward to the Great Lakes.

Why is this such as issue? As climates in some parts of the US allow for healthy fertile fish the chances of the grass carp becoming well-established is highly likely.

This threatens the life of native fish that rely so heavily on the aquatic vegetation to provide food sources in the form of microscopic plants and animals.

Also, it’s no surprise that the fish pop up within the carp angling world at a few select fisheries in the UK including Badshot Lea Big Pond and Mill lane.

Unfortunately though, these fish are miles behind the numbers of common, mirrors and other carp species that fill our commercial waters across the UK so you might find it hard to catch one.

As I touched on previously, the grass carp mainly feasts on aquatic vegetation and a lot of it eating up to three times it’s body weight per day.

More specifically grass carp prefer to eat the following types of aquatic vegetation. But in all honesty I’ll be surprised if you really actually care, but here’s the list anyway;

Although this will make up a large portion of this fishes diet they do actually eat other substances. I’m sure you’ll be glad to hear this if you plan on catching some of these fish.

I’m yet to see someone fishing with a piece of pond weed as a hook bait.

These fish will also eat invertebrate, mollusks, fish eggs, larvae and thankfully for us anglers some conventional carp baits like sweetcorn, boilies, tiger nuts and even bread from the surface.

In the warmer months grass carp can be spotted swimming in shoals on the surface with their fins sticking out of the water where surface fishing becomes the best method for catching these fish.

A stealthy cast of bread or dog biscuits should work very well in these circumstances but make sure there’s emphasis on the stealthy as these fish spook very easy.

If you’re going to be heading out to try to catch yourself some grass carp you’re going to want to know where you’ll find them right? In the UK the answer is pretty simple. There really only is a few fisheries that stock these fish and the wild population is so small it can be almost impossible to catch one in the wild.

In the US and in native countries these fish live in ponds, lakes and backwaters of large rivers and prefer very slow flowing or still water bodies filled with vegetation for them to consume.

Although this is the case for the vast majority of the time, these fish can be found in fast flowing rivers when spawning. As the grass carp lay there eggs which float downstream suspended in the water.

These fish are a hardy species and can survive in water of many qualities. They have no issues surviving in waters with low oxygen levels and water temperature from 0 to 33 degrees C water.

Spawning refers to when the fish reproduce and lay eggs. This spawning period happens only when certain conditions are met. These conditions differ from other types of carp which stops the natural reproduction of these fish in the UK.

These fish gain weight considerable approaching the spawn as they typically produce between 50,000 to 100,000 eggs per kg of body weight.

Grass carp will spawn in water temperatures of 22-27 Degrees Celsius in their natural habitat which is far off the 15-20 degrees Celsius temperatures usually recorded in the summer in the UK. This is the reason that the UK populations are so small as all fish are unable to spawn.

Allow grass carp lay sometimes millions of eggs very few of these will actually survive and become fully grown fish. These eggs are carried downstream by water currents where many are eaten or washed out to sea. The few that arrive at warmer back waters hatch and feed on an abundance of plankton, algae and weed growth.

Even when the fish get to this stage they are still very much at risk from predation and many more are eaten, which leaves very few survivors.

As water temperatures across the US can be quite similar to the Amur river and other native areas the grass carp population is spreading rapidly and become a threat to native populations.

Bow hunting for these fish and other carp species has become extremely popular in the USA where populations are growing rapidly. 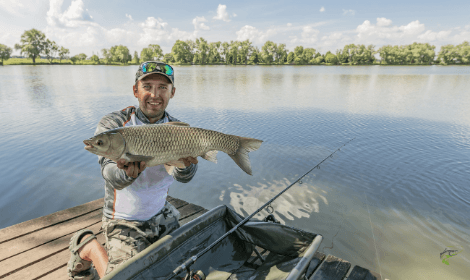 I’m sure all you anglers out there have been waiting for this part. Unfortunately if you plan on catching grass carp in the UK you’re going to need to find a fishery that stocks them to really have any chance.

If you find a fishery that stocks them or you ‘re fishing for them in the US or even in eastern Asia you’re going to need to know how to catch them right? Well good job you’re going to find out here.

Thankfully for you a range of your standard carp baits will work such as;

But the most effective baits for catching these fish seems to be floating surface baits like bread and even dog biscuits. In the summer grass carp can be found swimming in shoals on the surface.

They should be pretty easy to spot as they swim through the water with their dorsal fins sticking up out of the water.

By throwing in handfuls of dog biscuits or plenty of pieces of bread the fish should start to feed. Cover your hook with either dog biscuit or bread and cast to the fish.

If you are quite close to the fish you should be able to get away with casting to these fish with nothing other than a hook and bait.

If they’re a little further afield then you’re most likely going to need some sort of float to give you some weight for casting distance.

If the weather isn’t particularly hot and the fish arent’t cruising on the surface, ledgering is the most common approach and the bait should be presented popped up off the bottom.

If you’re lucky enough to hook into a grass carp you might think you’ve hooked into a bream or something rather small with how little they commonly fight.

This however changes rapidly when the fish gets closer to your rod tip and net which livens the fish up and can spur them into putting up a tremendous fight.

Make sure your drag is set accordingly and hold on tight!

So what is a grass carp? Well, you should now know exactly what grass carp are after this brief description of this interesting fish. The grass carp can be extremely exciting to catch and can be a real achievement to hook into one in the UK.

If you are interested in learning more about types of carp and carp fishing, be sure to browse around and check out our other interesting carp related material!

If you have any experience with catching grass carp or you have anything to add to this post please leave a comment below and I’ll get back to you as soon as possible.