Can You Eat Carp? – Find Out In This Post 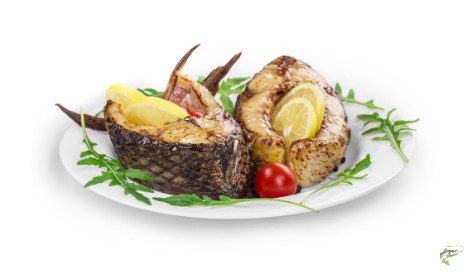 Anglers across the UK are excited about the prospect of catching carp again as summer kicks off. Carp are caught for sport all over the UK and the rest of the world. It’s aggressive feeding in the summer, combined with its unique behaviour, makes carp one of the most exciting sport fish in the UK and across Europe but it is very rarely targeted as a food source.

Can you eat carp? If you ask anglers in the UK, they will probably scrunch up their noses in disgust. But what about the rest of the world? Why is carp considered useless when it comes to cooking? It sounds like you’re curious!

Want to know why carp are considered inedible and whether or not you can eat carp in any way? Let’s find out.

Can You Eat Carp?

In short, yes. You can eat carp. It is not harmful to you at all and does not taste very bad either. However, do people like to eat carp? Not really.

Carp is a narrow-bodied fish with barbles on both sides of its mouth and a mouth that points downwards for bottom feeding. Primarily considered a ‘coarse fish’ useless to eat, most people love to catch carp for sport.

In the UK, most people will look at you sideways if you tell them you eat carp. Here, people consider it to be useless for eating but perfect for when it comes to sport fishing.

There are entire tournaments to determine who can catch the most carp, and anglers across the country try their hand at carp fishing all year. Coarse fishing is a diverse field of fishing with a vast range of techniques, equipment and tricks.

In the US, much like the UK, people do not like eating carp. Most Americans say it has a muddy flavor and a very fishy smell that makes it unpleasant to eat.

However, in the rest of the world, people do eat carp. Admittedly, it is not eaten as much as other fish species such as salmon, cod or trout, but it is eaten regardless.

There are specific methods to making sure that the carp’s muddy flavour goes away. One of the most common tricks to get rid of that flavour is to put it on a pile of ice as soon as you catch it. This step will decrease the blood flow to the muscles and decrease some of its unpleasant flavours.

Why does Carp get a Bad Reputation as an Edible Fish?

Why does every angler make a face if you say you’d like to eat carp? Where did it get its bad reputation from? Really want to know why? Let’s dive in.

The real reason most anglers dislike carp is because of its invasive nature. It destroys water quality, competes for food sources and causes other fish in the water to struggle to survive.

This poor water quality causes a decline in the species of fish that survive in that water. Still, the carp remains unaffected by it as it can survive in a wide range of challenging conditions such as unsuitable pH, low oxygen levels and muddy water.

This invasive behaviour causes many anglers to dislike carp.

When asked about the taste of the carp, most anglers will tell you that it lives in the mud, and it tastes like mud. Since it is a bottom-feeder, this part is partially true. However, it does not taste like mud because of its bottom-feeding quality. So, why does it taste muddy then? Let’s see.

Different fish species behave differently. Similarly, one needs to treat every fish species differently after catching them. For example, when biologists analysed carp, they discovered that the muddy taste comes from the carp’s rising histamine levels upon being caught.

You can solve this problem by putting the carp in ice water or on ice immediately after catching them. This method halts blood flow all over the body and stops the muddy taste from the histamine levels from migrating everywhere.

Most people who regularly eat carp will tell you that carp don’t taste bad at all once you let go of your bias against them. However, if you get some odd looks from your neighbours, don’t worry! They just haven’t tried carp yet.

Where Is Carp Eaten? 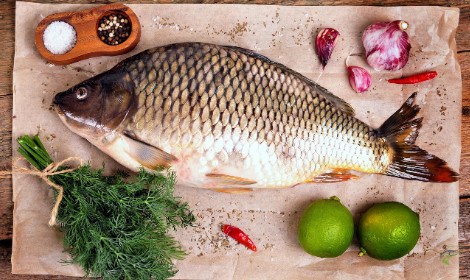 While China is credited with producing the most carp globally, it isn’t the largest consumer. Many parts of the world eat carp in different styles. Free of the prejudice that the Britishers and the Americans have against carp, they enjoy it by frying it, steaming it and even putting it in soups.

In Hungary, their traditional fisherman’s soup, consisting of carp and some other freshwater fish, is an essential staple of the Christmas Eve dinner. Likewise, many places in Central Europe include carp in their Christmas food.

In the Czech Republic, carp is the main ingredient in their Christmas Eve dinner. It consists of making a soup out of the carp’s head with fried carp on the side.

Czech families would also sometimes catch the carp and keep it alive in a tub or a container filled with water so that they could slaughter it right before dinner. This trick allegedly decreased the muddy taste. However, authorities discourage this practice because of concerns regarding animal cruelty and even injury to oneself.

In Jewish cuisine, carp enjoy a good status as the main ingredient in a traditional dish called the gefilte fish. It is a delicious mixture of different deboned fish that they serve as an appetizer.

Many people will also be surprised to learn that some forms of caviar are also made from carp eggs.

How To Prepare Carp?

Like all meats, there are many different ways to prepare carp. You can fry it, bake it, steam it or turn it into a soup. However, which methods do most people prefer? Let’s find out.

Before Cooking The Carp

Before you set it aside for cooking, make sure that you gut it entirely and put it on ice immediately. You can also pop it in the freezer. The reason for this haste is because carp spoils very quickly.

While gutting it, make sure also to remove all the blood that pools along the backbone. This step makes the carp taste less muddy and also prevents spoilage.

The skin is the part of the carp that gives the carp its fishy solid flavour and smell. Therefore, you can have a much more excellent carp-eating experience if you eat it first.

There are several ways in which you can cook carp after skinning and gutting it. What are they? Let’s see.

Deep frying is one of the mainstays of cooking fish. Just dip the carp in a matter of choice and fry until it is golden brown and crispy.

You can also bake carp. However, it is best to baste the pieces with an ingredient of your choice to give them a deep flavour.

Another great way to prepare carp is by stuffing it with ingredients of your choice. These ingredients include butter, lemon, vegetables such as onions and celery and potatoes.

You can also make a carp stew. Just fry some bacon and onions and mushrooms, add some flavours of your choice, such as tomato puree or tomato sauce, and add fried carp to it.

This information goes to show that there are many different ways to prepare carp.

Love it or hate it, the carp are here to stay. Whether it is for sport or food, carp is a fascinating fish to experiment with.

So, if you’ve learned how to catch carp and are now interested in knowing how it tastes, let’s hope this article provided you with some helpful tips on making carp taste good.

So, ready to see a different side of the carp? Try eating it and let us know how it went!