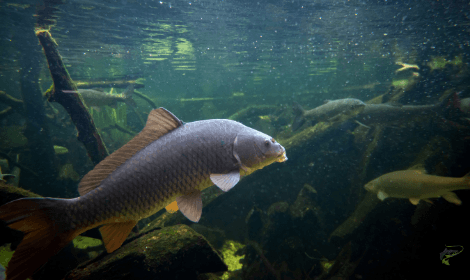 With summer approaching, many more anglers will flock to fisheries across the UK in search of carp. But can you really become a top angler if you don’t know anything about the fish you’re hoping to catch? Probably not.

From feedings grounds to the habitat to their nature, a good angler needs to know everything there is to know about a particular fish species if they want to excel at catching them.

So, if you’re hoping to catch a lot of carp this summer, you should probably brush up on some carp facts. These facts will not only help you become a better angler but also tell you all about one of the most popular coarse fish in the world— the carp!

The carp is a fish that anglers all over the world primarily catch for sport. They have rough, slimy bodies, and anglers usually find them in freshwater. Carp have a mixed reputation in different parts of the world. It is considered a damaging, invasive fish in Australia and the US but a great species to fish recreationally in many other parts of the world, including the UK and across Europe.

So, what is there to know about carp? Let’s find out.

While there are many other carp types present in many parts of the world, a few of the carp that anglers catch commonly in the UK are the mirror carp and common carp.

So, what do they look like, and how are they different from each other? Let’s find out. 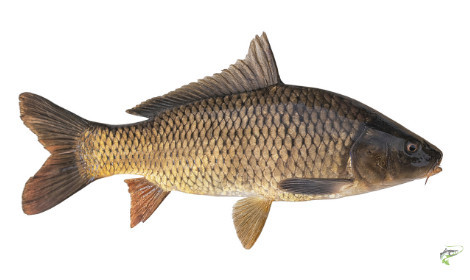 Carp are usually heavy fish. Small scales cover their entire body. These scales do not see a lot of variation, so most carp look similar to each other.

Their colours range from brownish to reddish shades. Their bellies are usually yellow or white. They have two barbels on each side of their mouth. 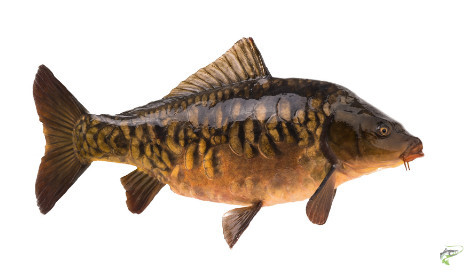 Mirror carp also have two barbels at each side of their mouth. They differ from common carp in the arrangement of their scales. Their scale patterns often vary, creating many formations. This variation is why most mirror carp look different from each other.

They are further divided into linear mirrors and fully scaled mirrors, depending on their scale formation.

3. You Can Easily Identify Carp

So, how can you identify the carp that you’ve caught? It’s straightforward.

Carp tend to have two barbels on each side of the mouth. Common carp have a uniformly-scaled body, whereas mirror carp have irregular scale patterns. Leather carp are almost free of any scales, except in a few places.

They also have toothless mouths, with an upper lip that protrudes more than the lower lip.

Their mouths point downwards, and they have a round snout. Although it is a feature common to many fish, they have a forked tail as well. 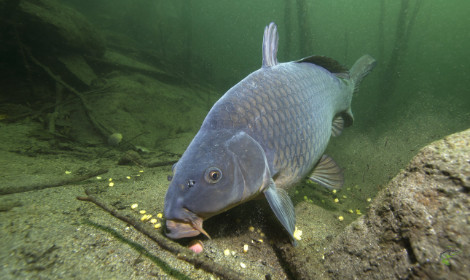 As the name indicates, a bottom feeder is any fish species that feed close to the bottom or on the bottom of any water body.

Carp also make the cut for bottom feeders because they feed themselves by scavenging for food on the lakebed. They also disturb the bottom when they feed, often causing the water to become muddy.

Another bottom feeder quality that carp have is their mouth. A carp has a mouth that points downwards, which is common to all bottom feeders.

Carp are omnivores— they will eat anything from dead insects to small fish to algae. Their barbels help them judge which food they should eat and which they shouldn’t. The teeth present in the back of their mouth then process that food.

When food becomes scarce in the winter months and the water temperatures drop, carp tend to decrease their activity. This inactivity allows them to conserve their energy.

6. No Concrete Record Of When Carp Came To The UK 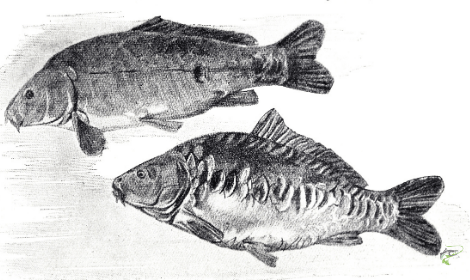 Now you may be wondering, what on Earth? Various books written about angling in England put the arrival of carp in the UK somewhere between the 12th and the 15th century. That’s 300 years in between, folks.

Historians do not know how carp populated the UK to this extent, nor when precisely the carp got there.

However, the UK middle class began fishing for carp as a recreational activity in the late 19th century.

External fertilisation occurs outside the female’s body during the spawning period. A mature female lays eggs on any water surface, which the male will later on fertilise.

The females can lay as many as 300,000 eggs in one season because predatory fish end up feeding on many eggs.

Eggs usually can take anywhere from three to five days to hatch.

You can also find carp in brackish ponds or muddy waters at lower altitudes.

The great thing about carp is that they can survive in a variety of conditions. Poor water quality and decreased oxygen levels have harmed most fish populations. However, carp have continued thriving in these conditions. 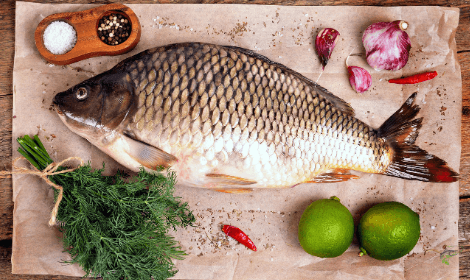 Most people know carp as the inedible ‘trash fish’ that anglers catch for sport. However, many people across the world eat different types of carp.

Many people worldwide eat the bighead carp, whereas crucian carp is a delicacy in Poland. Many countries such as Slovakia and the Czech Republic also eat the common carp. Chinese people tend to consume mud carp as well.

So, are you surprised to know that people do eat carp? We certainly are!

9. Carp Are Considered An Invasive Species

Many parts of the world consider carp to be an invasive species. This status is because they reduce the water quality wherever they feed. They are also powerful and have no natural predators. These characteristics cause their population to increase a lot more in comparison to other aquatic species.

10. Carp Do Not Socialise Much

Carp are not the life of the party in the water. Younger carp stick to each other in large schools, but older carp stick together in small schools or roam around alone.

Most solitary carp are huge, though.

The most prominent predators that older carp have are human beings. This fact is because carp are powerful and do not easily become prey for other animals.

However, fish such as the largemouth bass and walleye prey on younger carp. Some birds also feed on young carp.

This lack of any prominent carp predators in the water is why the uncontrolled carp population in most parts of the world.

12. Carp Can Get Pretty Big 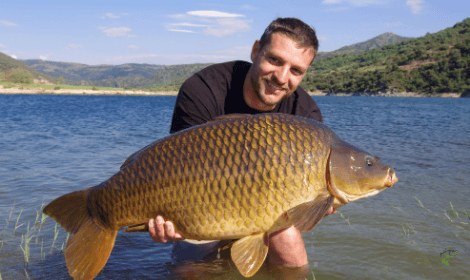 Most carp will grow to a length of 1-2.5 feet. While most carp weigh under 15 kgs, the heaviest carp’s record to ever be caught is 105 kgs.

That’s more than how much most human beings weigh!

Koi carp are large, brilliantly coloured fish from the carp species. They do not do well in competitive or predatory environments as their bright colours make them easy to spot and catch. This reason is why many places use them for decorative purposes in outdoor ponds or other such water bodies.

Unless you catch and then put them in a frying pan, the common and mirror carp can live up to 20 years. That’s pretty long!

This long life is another reason why carp populations can get a little damaging. They do not die off quickly, reproduce proficiently and survive well in harsh conditions when other species die off.

If the thought that the carp you catch might bite you, rest assured that it is not possible. Carp generally have toothless mouths, so they can’t bite you. So, how do they chew their food?

Well, they do it by what is known as their pharyngeal teeth. Their throat houses those teeth, so they can’t bite you either.

16. Carp Slow Down In The Winters

Carp do enter a sort of hibernation period in the winter, but you can still catch some types of carp if you try hard enough.

When the water is cold, carp go into a state in which they do not feed much. To conserve energy, they move very slowly as well. Carp generally move to the bottom of the water when they go into conservation mode.

However, there’s no need to be disappointed. Some fish such as the common and mirror carp do make an appearance here and there in the winters.

17. Carp Are Quite Active At Night

If you didn’t know this already, carp have quite busy nights. They feed and move around a lot during the night time. This tidbit means that any angler who wishes to have a peaceful carp fishing expedition can catch some of them at night.

Well, those are all the facts about carp that we thought you should know. Do you know any more?

Carp are quite a fascinating fish species. They are challenging to catch and have interesting feeding patterns and quirks that make them an excellent species to know all about.

If you want to become a great angler, we would advise you to read all the carp facts you can find carefully. After all, they say, know thy enemy.