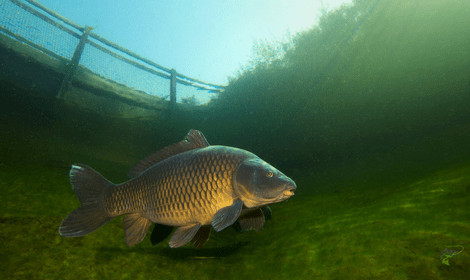 Some sort of carp species have been introduced into every continent across the world apart from Antarctica and carp fishing is constantly becoming more popular, especially in the UK and Europe.

These fish grow to much larger sizes than native fish swimming in the waters and bring their own fishing techniques and tactics to put them in the net.

Commercial fisheries are common where anglers can buy a day ticket to fish in highly stocked ponds and lakes with the likes of common and mirror carp.

Across the world, carp are also common in many lakes and have even become a problem as an invasive species in some parts of the world, including the USA.

If you’re looking to start carp fishing or are just interested in learning more about where this carp learns then this post should be of use.

I’m sure everyone knows that carp live in lakes and ponds, but some have yet to come across river carp.

So, can carp live in rivers?

Can Carp Live in Rivers?

Yes, all the types of carp that swim in lakes and ponds can be found in rivers and even canals, and they can near enough be found in any freshwater aquatic habitat.

Carp can survive in both flowing and still waters and are a hard species of fish that can live in muddy low oxygenated waters that a lot of freshwater fish species cannot survive within.

Carp can not only survive in upper and mid freshwater areas of lakes but can also survive in “brackish” water of estuaries where rivers meet the sea.

In these areas, the salt content of the water is high, but carp have no issues surviving in these areas.

Although carp live in rivers, they prefer slow-moving waters and are not commonly found in fast-flowing water stretches.

Asian carp were introduced into the Mississippi River basin in the US in the 1970s to control algae, weeds and parasite growths but have become a real issue to native populations and the river ecosystem in parts of the US.

This is due to the rate at which these carp can breed in the rivers of the US due to the favourable climate.

These fish can produce as many as two million eggs in a year during spawning seasons. Although very, very few of these eggs will survive, they still reproduce at rapid rates that can easily run away from conservationists.

Silver carp, one of the introduced species, is also becoming a safety concern in rivers as their population increases.

The silver carp will leap from the water and jump up to 10 feet out it if they are disturbed by passing boats or even rocks thrown into the water.

Where fishing and watersports are popular, this can be extremely dangerous as some of these fish can grow over 20 pounds.

The Missouri river is an area where it is now very dangerous to water ski or travel in boats due to the risk of being hit with a jumping silver carp as you travel.

Where to Find River Carp?

Now that we’ve established that carp can be found in rivers, let’s look at where you can find them if there is a population in the river.

Any slow-moving areas of rivers such as back channels, slack water off to the side of weir pools, deep slow stretches and marinas.

Finding river carp can be more challenging than locating lake carp, but some of the same spots that carp like to stay near in lakes can be the same for rivers.

Features in the water such as overhanging trees, fallen trees, lilly pads and weeds can all be areas that could hold carp in rivers, but rivers will have an abundance of these, so keep this in mind.

Forks that create an island can also be great areas to look for river carp.

Although a carp population can reside in a river, there may be a lot of the river that never sees any carp.

How to Catch River Carp?

When fishing for river carp, one of the main challenges will be locating where the carp are.

River carp are known for being especially elusive, and the chances are the carp population in rivers will be far less than those in commercially stocked waters.

Finding them is the main challenge but getting them to feed comfortably in a location and hooking and fighting them is also a large challenge.

Warm sunny days are great for finding river carp as they will likely be in the top few feet of water.

Polarised sunglasses are a big help here as they will allow you to see further into the water and remove the glare from the sun.

You will need to spend a lot of time walking the bank and looking for these carp before you even think of casting a rod.

Many parts of the river won’t contain any carp whatsoever so you must find where they are.

Once you locate some carp on a stretch of river, a good approach is to try and locate “patrol routes” where the carp will move between different areas of the river.

If you can watch the carp for while and notice the routes they commonly take, then you can start to bait an area of this route.

You should keep baiting this area for a week or two before you get down to some fishing.

Rivers can hold a lot more “nuisance” and coarse fish than lakes and commercial venues so be prepared for bream, roach etc, to take advantage of this free meal as well.

You can use larger chopped boilies or pellets if you want to try and limit the impact of these nuisance fish.

After baiting for a week or two, hopefully, the carp should be comfortable feeding over this spot and will often come back to check for any more free bait.

Now you’re ready to get fishing.

As river carp are usually less pressured by anglers, the rig you use doesn’t need to be fancy, and a simple hair rig with boilies attached to a lead should be adequate.

Carp do live in rivers but locating and catching them can be a much harder task as populations are usually far less than commercial fishery venues.

The main challenge in river carp fishing is finding the fish.

Once you’ve located the fish, you can start baiting an area for a while and then, as long as the carp are feeding comfortably in this swim, you can cast out a simple carp rig and hopefully get some river carp in the net.