Why Are Carp So Fat? – Explained 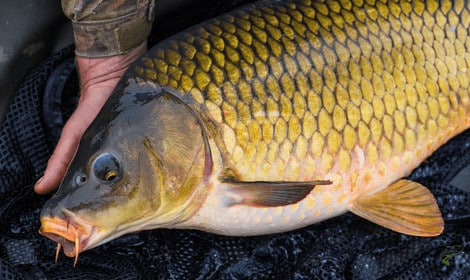 There’s no doubt that carp are the largest freshwater fish species present in the UK. They easily dwarf the majority of other coarse fish species, and there’s no wonder carp fishing is so prevalent in the UK and across Europe.

Their muscular, fat and powerful bodies put an excellent fight if you’re lucky enough to get one on the end of your line.

You may wonder how these fish get to these ridiculous sizes of 40 and above lb’s and why the other coarse fish swimming in the water are so small.

In this post, I will look at the history of carp to uncover why carp are so fat compared to other species of coarse fish in the UK.

Why Are Carp So Fat?

The wild carp that could be found swimming in waters across some parts of Europe and Asia were nowhere near the massive sizes of fish you can find in fisheries today.

Carp are not native to the UK, and even the first carp in the UK that were domesticated and brought to the UK by monks as a food source in the 15th century were a lot less fat.

The reason carp are so fat today and grow to sizes well over 40lbs is due to centuries of selective breeding carried out by these monks in the early days to grow the fish to larger sizes and also to reduce the scales so they were easier to consume.

This is how mirror carp was born. These mirror carp would grow much larger than the “wild” common carp as they would use far less energy growing full bodies of scales and would put this energy into growing in size.

As carp angling began to take off in the 18th century, fishery managers across Europe began to selectively breed common and mirror carp to grow far larger and fatter.

Originally fish from Holland could grow to unimaginable sizes through sustained bone growth for longer than usual.

How Are Carp Selectively Bred? 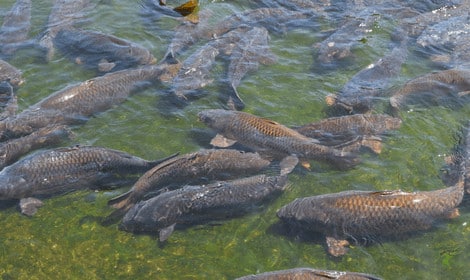 To produce these fat carp swimming in our fisheries today, the fish have been selectively bred in controlled environments where the largest fish are bred with each other.

The process is extremely complex and takes professionals to carry out the process.

First of all, carp fish farms will need to select “brood” fish that have all the traits that will provide the ability for their offspring to grow to large sizes and become fat and heavy for us anglers to catch.

During the wild, carp spawn when external parameters such as the water temperature, daily light levels, oxygen in the water, abundance of food and a few other things have to be right for the carp to spawn.

For these fish to be bred in fishery ponds and tanks these parameters need to be mimicked.

When the fish are ready to breed, the female will become fat with millions of eggs.

When parameters are met, and the fish are ready to breed, the male and female fish are sometimes injected with hormones to encourage the females to release their eggs and the male their sperm or “milt“.

The eggs are collected by massaging the sides of the fish, and the sperm from the male is collected in a similar way.

These are then mixed to fertilise the eggs and moved to an incubator jar before hatching.

Once the fry are hatched, they will be fed marine plankton.

Once they grow, they are moved to different tanks, and the times and quantity of their food is increased.

Eventually, the fish will grow to sizes able to eat pellets and can be moved to larger ponds.

This is an extremely simplified version of how carp are selectively bred to grow fat.

Carp have not always been as large and as fat as you find them today.

Through centuries of selective breeding, the domesticated carp we have today have been able to grow to larger sizes nearly year on year.

It’s common to hear of a new world record carp every year or two, and we can expect to see them for years to come as this selective breeding is not slowing down.

This post should give you an insight into why carp are so fat.

If you have any questions, don’t hesitate to leave a comment below, and I’ll get back to you as soon as possible.