How Do Carp Feed in Dirty Water? – Explained 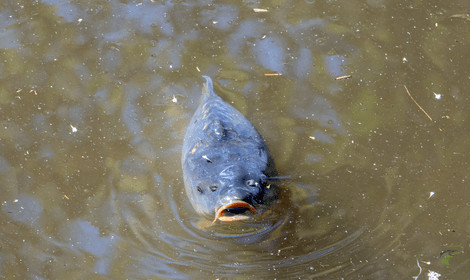 Carp angling comes with its own set of fishing approaches, tackle and technique and is fast becoming an extremely popular area of angling in the UK and across Europe.

These fish fight extremely hard, and their elusive nature can provide a real challenge to hook into a real specimen fish.

Their behaviours are far different from other sport fish, such as the predatory trout and salmon, and if anglers choose to target these fish, they will need to learn a new hobby.

If you want to be a successful carp angler, then it can pay massively to learn all about the anatomy and behaviours of this fish.

One behaviour that can improve your carp angling is to learn exactly how the carp finds food and feeds in the water so you can understand why you’re fishing the way you are.

I’ve written various posts on this, and today I’m going to be focusing on how carp feed in dirty water.

A lot of people believe that when the water is dirty, then there is a lower chance of catching these fish if they won’t able too see and locate baits in the water.

This is not the case.

So, how do carp feed in dirty water?

How Do Carp Feed In Dirty Water?

It can be extremely common for the water to become visibly “dirty” if the population of carp in the water is high. One of these reasons is due to the way that the carp feed.

As they are bottom-feeding fish, they spend large portions of their time cruising the bottom looking for anything edible.

During this process, they can spend a lot of time rooting through the silt on the bottom, looking for any natural food sources such as bloodworms or molluscs and in the process, stir up a lot of silt.

Over time this silt becomes suspended in the water in large quantities, which makes the water appear dirty.

For the carp, this is no problem at all.

These fish have a specialised set of “tools” that are perfectly adept at finding food in dirty water and don’t need to rely only on their eyesight.

Let’s take a look at these.

Although it may seem that the water is too dirty for the carp to see and pick out food in the water, this is usually not the case.

The eyesight of carp has evolved over centuries to be far more effective at seeing in murky water and in lower light levels as the light struggles to penetrate the water to great depths if the water is dirty.

That being said though, if the water is dirty, the carp’s vision will be affected.

This is where it relies on its other senses to find food in the water.

One method that carp use to find food in dirty water is their taste buds.

Carp have two appendages hanging from either side of their downturned mouths covered in tastebuds and used to taste any potential food sources below them as they swim along the bottom.

Also, the mouths of the carp are laden with taste buds, and they will commonly pick up items and taste them before spitting them back out or feeding on them.

This doesn’t necessarily help the carp locate food, but they can spend a lot of time swimming around tasting areas on the bottom until they locate something edible. 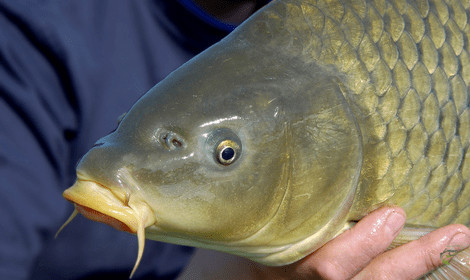 Carp sense of smell or “olfactory system” is extremely powerful compared to humans, and this is the main way that carp will locate and feed in dirty water.

Us humans use our nostrils to smell the air, but as carp are constantly submerged in water, their sense of smell or “olfactory system” as is often referred to as needs to “smell” within the water.

This sense of smell is used for sensing chemicals diffused in the water to find food, finding a mate during the spawning season, and any chemical messages released from predators in the carp’s early stages of growth (carp generally don’t have any predators once they’re large enough).

If you pay much attention to the carp you have caught, you will notice two openings covered by skin flaps between the fish’s eyes and mouth.

These nostrils (sometimes referred to as nares) are the opening to an extremely sensitive olfactory system that can sense dissolved chemicals and substances in the water in extremely small quantities and from large distances away so they can hone in on a food source in dirty water or avoid predators.

Now that you know that carp have a highly sensitive sense of “smell”, let’s look at how exactly this olfactory system works.

Under the flap of skin, each nostril has two holes, one for channelling water in and one for releasing the water out.

Within the “tube” system of the nostrils, there is something called the “olfactory epithelium”. This allows the carp to sense the dissolved substances in the water and determine if something is an edible food source and worth tracking down.

There is a constant flow of water in and out of the nostrils and passing over the “olfactory epithelium” to constantly smell and detect substances in the water as the carp moves.

This constant flow is due to pressure differences between the two holes or by the beating and movement of tiny hairs within the tube of the carp’s nostrils.

How Sensitive Is Carp’s Smell?

Carp’s sense of smell is highly sensitive and can detect extremely low levels of chemicals.

These chemicals are given off by natural food sources such as blood worms, snails or crustaceans in the water.

This highly sensitive olfactory system can sense food sources buried in silty areas of the lake or from far distances if the bait is highly concentrated in one area.

Their sense of smell can even detect the chemicals released when the bloodworms or bait is buried in this silt, so they know exactly where to look.

Once they have located the area of food, they will then use their sense of taste and even their eyesight to help further locate the bait as they dig around in the silt.

One of the chemicals that carp are great at detecting is amino acids. Studies have shown these amino acids to be feeding triggers for fish.

This could be because the natural food sources discussed above release amino acids and smell into the water, drawing the carp in.

Understandably, many new anglers believe their chances of catching carp are reduced in dirty water.

However, I’m sure you can now see this is not the case.

Carp have plenty of “tools” that they use to find food in dirty water; the best is their sense of smell.

I hope you’ve found this helpful, and if you have any questions or anything to add, leave a comment below, and I’ll get back to you ASAP.