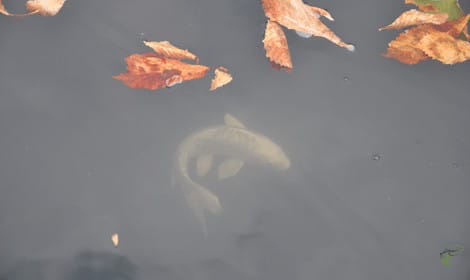 There are many different types of carp swimming in commercial fisheries and natural waters up and down the UK, across Europe and other parts of the world.

The mirror and common carp are plentiful in waters and the most common types of carp caught and stocked.

One type of carp you’re not going to come across very often and sparks interest between anglers and non-anglers alike is the ghost carp.

There are a lot of false beliefs about the ghost carp, and some even believe that if they are stocked into ponds, they will feed on the other fish.

This isn’t inherently true, so in this post, I will answer the question “do ghost carp eat other carp?”.

Do Ghost Carp Eat Other Carp?

Ghost carp is a hybrid breed of carp that is created by the breeding of common or mirror carp with Platinum or yellow ogons which are both varieties of Koi carp.

This is what gives the ghost carp its silver, white or yellowish colour.

So basically, Ghost carp are extremely similar to common and mirror carp in their genetic make-up and also their behaviour.

As you can now imagine, if ghost carp follow the same behaviours as common and mirror carp and other carp species, then they’re not going to be eating all the fish in a pond.

Carp and also ghost carp are not predatory fish and will not generally eat larger fish swimming in the water with them but that’s not to say they will 100% not eat other smaller fish.

They definitely won’t attack larger mature fish, but they are classed as omnivores and after spawning periods, they will eat eggs that are released into the water by female fish, so I suppose, in a way, they do eat other fish.

Also, they may consume small carp fry or other fry if it is swimming in the water with them.

What Do Ghost Koi Eat?

Now that we’ve established that Ghost koi don’t actively hunt and eat other carp just like other carp species do not, let’s take a look at what they will usually eat.

As I’ve mentioned a few times in this article, ghost carp are very similar to common, and mirror carp, so follow the same behavioural patterns and also have the same diet.

So, if other carp will consume it, so will Ghost Carp.

Ghost carp are opportunistic feeders and omnivores, which basically means that they will eat anything they come across in the water column that they deem has some nutritional value, whether it be plant or animal based.

Naturally, this will generally be any water-dwelling insects or crustaceans or anything that is washed into the waterbody through rain or wind.

When it comes to what carp bait that ghost carp will eat it’s the same story.

They will consume all the usual carp baits that are used for targeting other species of carp, such as boilies, pellets, sweetcorn, groundbait, hemp, tiger nuts and basically anything else that will hook you into other carp species.

Ghost carp are not all that different from other species of carp and will have the same diets as the other carp swimming amongst them.

So, ghost carp will not eat all of the other fish in the pond and will much rather feeder or small insects or larvae in the water column.