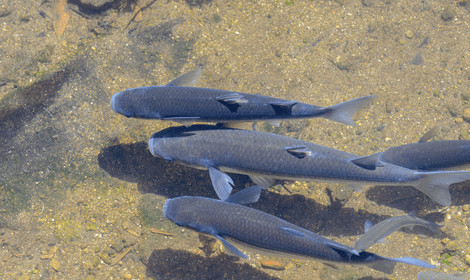 Carp have been introduced into nearly every continent except the poles.

In the UK and across Europe, they are regarded as sport fish, and millions of anglers will regularly head to the banks to try and beat their PB or get plenty of fish in the net.

Commercial day ticket carp waters are common in the UK, where anglers can pay for a day catch and release at a pond that is well stocked with carp.

Usually, these waters will be dirty if there is a large population of carp, but sometimes the water may be quite clear depending on the conditions.

Carp are scavengers and opportunistic feeders. They will use their highly adept senses to find anything edible at the bottom of the water, up in the water column, and sometimes even from the surface.

Due to this, many people believe that carp can keep ponds clean, but this is not true in all cases.

Today I’m going to get to the bottom of this.

So, do carp keep ponds clean?

Generally speaking, no carp will not keep ponds clean, but it depends on the type of carp you have swimming in the water and their population density.

The majority of carp species are classed as bottom feeders. This includes the most common types of the mirror and common carp, which will be the most common in fishing venues and ponds.

As these types of carp search for food, they can often be found rummaging through silt and debris on the bottom of the water, sometimes even digging right down into the silt as much as 20cm.

They do this to look for natural food sources such as bloodworms, other crustaceans, and even fishing baits that may become covered in silt if they go undiscovered for a while.

As the carp feed in this manner, they kick up and suspend a lot of silty in the water, which can increase the turbidity of the water.

This relates to the amount of silt suspended in the water and how murky and dirty the water can look.

So in this manner, the carp will not keep ponds clean and can make them look even dirtier.

However, there is one type of carp that is known for helping to keep ponds clean.

Let’s take a look at the grass carp. 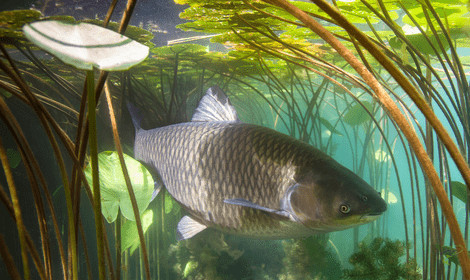 Grass carp, unlike other species of carp, will not feed on the bottom as often and don’t generally stir up as much silt into the water when they are found feeding on the bottom.

As the name suggests, grass carp will also consume a lot of algae and aquatic weeds, which can stop the pond from becoming overgrown and generally make it look cleaner and tidier.

Believe it or not, grass carp are commonly used in Chinese rice paddies to control weed growth and provide a source of protein.

The grass carp generally don’t eat the full weed and will typically “shave” parts of the plant and eat it from the top, leaving the bottom and roots intact.

This is beneficial for keeping ponds clean as they don’t dig up the roots and release dirt and debris into the water column.

Generally, most species of carp will not keep ponds clean, and if there is quite a dense population of carp in a pond, they will most likely make it dirtier with their bottom and benthic feeding.

On the other hand, grass carp can be great for controlling weeds and algae in water without stirring up too much silt, which can keep a pond clean.