Can You Eat Gudgeon? – Taste, Preparation and How to Catch Them

When it comes to the freshwater fish we eat in the UK, you will find it very hard to find anywhere selling anything other than the usual trout and salmon.

The UK and more particularly Scotland provide excellent opportunities to fish for these know tasty fish, and there is no shortage of them in store.

In the UK there are long lists of other freshwater fish that are abundant in our water. This group of fish are usually referred to as coarse fish.

I’ve been writing articles to cover how edible the other coarse fish swimming in our waters are and generally why no one chooses to eat them.

I’ve already established that perch and pike are both considered tasty meals in other places across Europe, and today I’ll discuss if the gudgeon can be eaten.

Can You Eat Gudeon?

I must say, Gudgeon is not a fish I have tasted or, in fact, heard of anyone eating in the UK but there is places in Europe that they do in fact, eat gudgeon, one of these being France.

So, yes, you can eat Gudgeon. As a freshwater fish in the UK, there is really nothing stopping you from consuming the fish but if they’re good to eat is another question.

Gudgeon are the smallest coarse fish swimming in our waters and are very rarely recorded over 15 cm. As you can imagine there’s not going to be much eating in they after they are prepared.

I’ll get into how to prepare them further through the post.

I can find some reports on cooking websites online that they have finely textured flesh that is considered tasty.

There are also reports of Gudgeon being eaten in the UK as far back as the Roman era and were an important food source for a lot of people.

When food was in short supply in these times, a lot of the coarse fish in our waters would have been consumed.

I also found some people talking about eating them in the UK, and they say they taste “earthy”, doesn’t sound the most appealing to me.

If you live in the UK and feel like experimenting with more native fish, then there are laws that determine how many fish you can remove from public waters.

A lot of the gudgeon population in the UK will be stocked in commercial fisheries, which will have a strict catch and release policies.

So, if you fancy tasting gudgeon, makes sure you are allowed to remove the fish from the water.

You are allowed to remove 15 small fish up to 20cm a day, so if you can get any gudgeon in the net, then you’ll be able to take home a good few.

Since they are small fish, you’ll need to prepare around 8 for it to be enough for a meal.

How to Prepare Gudgeon?

When it comes to eating and preparing gudgeon, most reports online follow the same process.

In France, they are also deep fried until they are very crispy with lemon and chopped parsley

How to Catch Gudgeon? 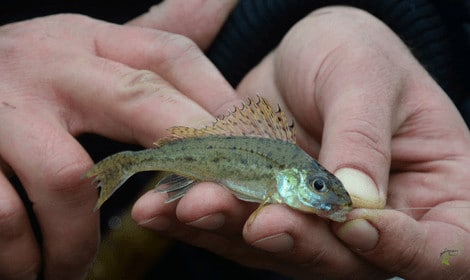 If you’re interested in tasting gudgeon, then you’re going to need to catch them yourself as they’re not commonly found in stores or fishmongers.

They are widespread in lower England but unfortunately less common in Wales and Scotland in public waters.

They are bottom-feeding fish and are usually found in shoals in freshwater rivers and lakes.

Naturally, they will eat small invertebrates, larvae and freshwater shrimp as well as fish eggs.

If you want to catch them, you can use maggots or small pieces of chopped worms on small hooks.

Since they are bottom feeders, you are best to fish for them on the bottom using small split-shot weights to sink your hook on by fishing with a float rig with your bait on the bottom.

As they are found in shoals, once you catch one you should have no problem catching more.

Like other coarse species of fish in the UK, Gudgeon can be eaten, but it is extremely uncommon in British culture.

If you want to taste them, then make sure you follow UK and fishery laws and never take any fish when not permitted.

If you have ever tried Gudgeon, then please leave a comment below what you thought of it.