Can You Eat Pike? – Flavour, Preparation and How to Catch Pike 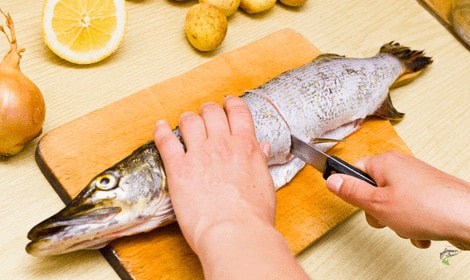 When it comes to eating freshwater fish in the UK, your choices usually start with trout and salmon.

You’ll have absolutely no issue finding fillet of trout or salmon in stores, and the fishing for both species is common, with plenty of rivers, lakes and fisheries.

Although there is plenty of other freshwater fish swimming in our waters that are consumed across Europe, the majority of us brits would never even consider eating them.

Believe it or not, perch is actually considered an extremely tasty fish that is popular in France and Switzerland.

In Poland and Romania, the pike is classed as a high-value fish, and many will happily consume the meat of these fish regularly.

I’m sure you’re wondering, “can you eat pike?” so in this post, I’m going to provide plenty of information on what pike tastes like, how you can cook it and if it is legal in the UK

Can You Eat Pike?

Yes, you can definitely eat Pike. Its meat is edible albeit bony and is popular in some European countries including Poland and Romania.

Pike, like other fish, is high in protein and various other nutrients such as B3 and B12, which can make a healthy addition to your diet.

The meant also has omega 3 oils which your body can’t make on its own. Omega 3 (if consumed regularly) is said to help lower blood pressure and reduce the likeliness of heart attacks and strokes.

Although cooked pike is 100% safe to eat, you should avoid eating it raw.

Pike, like a lot of other fish species, contains small amounts of mercury that is picked up from contaminants in the water they swim in.

As fish are high on the food chain and eat other fish, then their mercury contamination could be higher.

Due to this, you should avoid eating a lot of Pike as the mercury can slowly build up in the body and produce problems such as muscle weakness, pins and needles and in extreme cases, more serious problems.

Pike are also bony fish with bones all throughout the fillets, which puts a lot of people off from the start and preparation and cooking can become a hassle to remove and avoid bones.

Pike have a distinct mild flavour with firm white meat that has quite a few bones running through it. For a lot of people, this is enough to put them off as preparation time is greatly increased if you want to serve bone-free fillets.

Even the thought of leftover bones ending up in your mouth is enough to put people off.

If the skin is left on the pike before cooking, the fillet can take on a “muddy” flavour which is obviously something you want to avoid.

Thankfully, the skin can be removed fairly easily with a sharp knife.

Some people think the taste is rather “fishy”, so if you’re looking for a milder unorthodox fish then try some perch which is meant to taste a lot less fishy.

Like much fresh water fish, the water quality will play a large role in the flavour of the fish. Pike from cold clear water usually tastes the best.

Although Pike tastes fishy, you should avoid eating raw Pike that smells fishy. This indicates that the meat has started to go off and should be avoided.

Of course, if you’re catching and eating Pike on the same day and making sure the fish is refrigerated, then you have nothing to worry about.

If you’re interested in catching some pike for the dinner table, then the UK has a few laws on what you’re allowed to take from public waters legally.

These laws are in place to stop the rapid decline of fish stocks.

Whether you can keep a fish will depend on the species of fish and also where you are fishing. Some local laws will be different, so make sure to read your local bylaws before removing any fish from the water.

Keeping a fish that is under or oversize can result in fines if you’re caught.

In the UK you can take 1 pike up to 65cm. This is plenty for a large meal.

How to Prepare Pike?

The video above provides a great tutorial on how you can skin and fillet a pike to have fillets ready to cook in the your favourite recipe.

The steps you can follow can be found below:

How to Catch Pike? 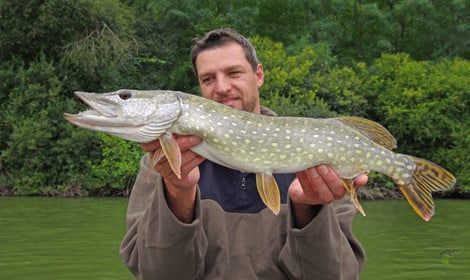 Now that you know that pike is completely edible and a highly regarded meal in some countries, you might be wondering how you can catch yourself one for the dinner plate.

Pike are classed as coarse fish and be caught in rivers, ponds, lakes, lochs, fisheries and even canals across the UK.

There’s no shortage of pike fishing in the UK, and you shouldn’t find it difficult to find local water with a decent head of pike.

If you’re planning to go out fishing for Pike for the dinner table, then make sure you’re allowed to keep fish from the water you’re fishing and that you have all the required permits.

As pike are predatory fish, you can catch them with spinners and lures or even by dead baiting with chunks of dead fish.

I’d say to easiest and most beginner-friendly way to catch pike is by using spinners or lures.

If you’re found local water that has a decent stock of pike, then you can easily tie on a spinner and start casting.

When using a spinner you can cover a lot of water in a day, and the chances are if the pike is there you’re likely going to hook into one.

Pike can actually be made into a tasty meal, and it’s mainly the UK culture that disregards pike as an edible fish. This could be due to the abundant access to highly regarded freshwater fish such as trout and salmon and also the abundance of saltwater fish caught in our waters.

The pike is eaten across Europe, with a lot of people standing by its unique flavour and firm white meat. Some even say it tastes like chicken, but I find that hard to believe.

So, next time you catch a pike and are allowed to remove it from the water, why not take it home to try cooking it?

If you have any questions, don’t hesitate to leave a question below, and I’ll get back to you ASAP.