Can You Catch Carp on Lures? – Bass & Fly Lures 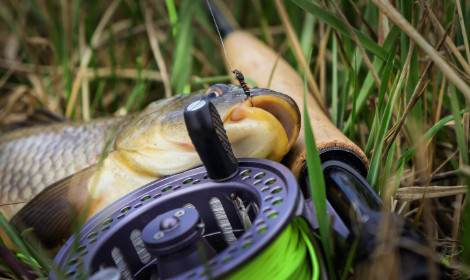 There is no lack of carp fishing baits on the market today, with modern carp angling companies pumping out many variations of carp baits, such as boilies and pellets with an endless amount of ingredients, colours and flavourings.

It is common in tackle stores to find walls lined with all different brands and types of hook baits, but there are also some more unconventional baits that some anglers have been using to catch carp in different situations.

One of these is some types of lures.

When you think of lures, you usually think of targeting predatory fish with a lure that mimics the other fish species that they consume in the water.

Due to carp not generally being predatory fish and not hunting other fish in the water, then you’d generally believe that most lures would be useless for catching carp.

In most occasions, this is generally true, but some artificial lures and baits have been proven to catch carp in certain situations.

So, can you catch carp on lures?

Can You Catch Carp on Lures?

Before getting into if you can catch carp on lures and what lures are best for targeting this species, it’ll be best first to explain exactly what lures are.

As I mentioned, lures are generally considered artificial baits that mimic bait fish or other food sources in the water that predatory fish will be drawn to.

These could include spinners, spoons, soft plastic to mimic worms or even fly fishing “lures” that are used to mimic small bait fish; however, all flies can often be classified as lures as they mimic prey that attracts the attention of predatory fish.

Generally speaking, carp are not predatory fish and will not actively hunt for other fish species, but they are still classed as omnivores. They will consume both plant and animal matter and sometimes smaller fish, although this is not the primary food source.

Although carp are not classed as predatory fish, there have been plenty of reports of anglers catching carp on lures to mimic small bait fish or other larger animals in the water, so why is this and can you catch carp on lures consistently?

Let’s look at some common types of lures to see if they can catch carp and why it is thought that the carp might strike these lures.

Carp are prolific in US waters, where bass angling is the most popular area of angling.

Bass angling is generally done with various types of lures, such as:

I’ve read many reports and seen many pictures of bass anglers claiming to have caught large carp using various bass fishing rigs; some may of course, be foul hooking as the lures are reeled passed the fish but a lot of the pictures look unmistakable, like the carp has struck the lure.

As some of these bass fishing lures are made to mimic some of the carp’s natural food sources in the water, such as worms or crawfish, then it should be no surprise that the carp may sometimes pick up bass baits from time to time.

So yes, carp will consume bass lures, but you will be far more likely to hook into a carp by using static bottom baits for carp such as boilies, pellets or even sweetcorn.

Fly fishing is becoming increasingly popular in carp fishing due to the fight a carp can put on a light fly fishing rod and reel.

When fishing for carp using a fly fishing set-up, it is most common to use floating baits in the same way that carp anglers would fish for carp on the surface with normal fishing tackle.

This usually includes using baits that mimic floating dog biscuits or bread. Anglers will usually throw in handfuls of these floating baits to surface-feeding fish, wait until they hopefully begin feeding comfortably and then cast in a floating white or brown blob that looks like the bait you have been feeding.

In this sense, I wouldn’t classify these as lure fishing, but there is plenty of reports of anglers catching carp on other flys that could be classed as lures.

For example, carp can be caught on nymphs or buzzers or any fly pattern that imitates a natural food source of the food carp consumes in the water.

This could be classed as using lures to catch carp, as these small flies mimic the insects that the carp consume.

However, there are also reports of anglers catching carp or larger lures used for the likes of trout fishing.

Some anglers have even gone as far as to target carp using popular trout flies such as the cat’s whisker or fritz gold heads.

These types of lures are generally fished moving for trout and are used to mimic small bait fish or to bring out the predatory instincts of the trout as they are pulled passed them.

So if carp don’t often consume other fish and shouldn’t be territorial, so do these fly fishing lures catch fish?

Yes, carp have been known to take these types of lures.

I’ve read an article on one angler who spent months targeting carp with these types of fly lures to try and put a few in the net.

The carp seemed interested in following these lures and some, but not many, were intent on picking up the lure.

So yes, carp can be caught on fly fishing lures, but you are more likely to catch them by using fly patterns that mimic their natural food sources in the water rather than the bright and large lures sometimes used for trout fishing.

There are plenty of variations of typical carp baits on the market that the average angler won’t even use nearly all of them, but still, some anglers are always looking for new unconventional tactics for targeting these fish.

One of these methods is by using lures.

Many imitation flies could be classed as lures that fly anglers might use to target carp.

These imitation flies mimic aquatic insects that the carp will regularly feed on, so it’s no surprise that these flies can be used to target carp.

There is also a lot of reports of carp taking bass anglers’ lures, so it’s possible to catch carp on lures, but this will be a far harder challenge than using the conventional carp rigs and baits.