Can you Catch Carp on a Fly Rod? – Tackle, Flies & Approach 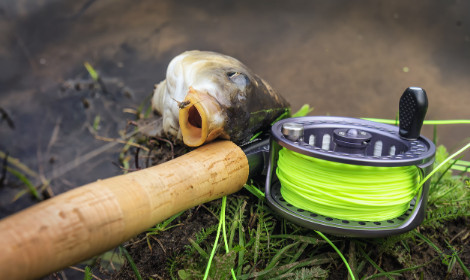 Carp are fast becoming one of the most popular sport fish in the UK and across Europe, with millions of anglers taking to the banks regularly in the hope of putting a few carp in the net.

Since its inception in around the 18th century in the UK, anglers have consistently developed new and modern techniques to target these fish.

Mainly, these carp fishing tactics have been with bottom rigs fished with a conventional rod and reel combination.

When you think of fly fishing, the first species that come to mind is trout and salmon, fishing various flys on a fly rod and reel being the most popular and highly regarded tactic.

This method of fishing is more specialised and takes years of practice to perfect your cast and establish the best flies for certain fishing situations.

Believe it or not, some anglers have been using fly rods and reels for targeting large carp, which put up a tremendous fight and generally grow larger than common trout and salmon.

In this post, I’m going to look at this niche area of carp angling to show you exactly how you can give it a go.

So, can you catch carp on a fly rod?

Can you Catch Carp on a Fly Rod?

Yes, carp can be caught on a fly rod, and if you’re an experienced fly angler, then they could be a great species to catch for the sport if you’re only interested in catch and release.

Many anglers will target trout and salmon and keep them as a food source, but when it comes to carp, although they can be eaten, they’re more popular as catch-and-release fish.

As carp grow to large sizes and are common across the UK they can be a great fish to target on the fly.

Carp will eat many of the natural food sources as trout, such as crustaceans, insects, larvae and molluscs, so typically, you can target these fish with some of the same flies as you target trout with.

For example, nymphs are flies used to mimic the immature stages of aquatic insects such as the caddisfly, stoneflies and mayflies, so when presented correctly can help you hook into carp.

Although possible to hook into carp with flies similar to this, the most popular way to catch carp on a fly rod is during the summer when the carp can sometimes be found feeding on the surface, but I’ll get into that further through this post.

To target carp on a fly rod, you’re going to need a whole new tackle set up with a specialised fly rod, fly reel, and of course, fly line.

What Tackle Do You Need? 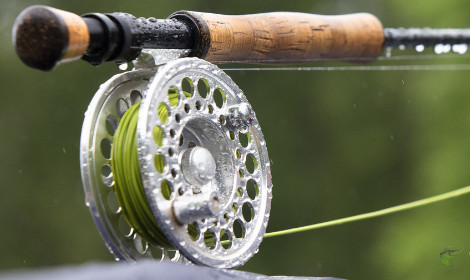 The first step to catching carp on the fly is naturally going to be the tackle you’ll need. Unfortunately, your prettied rigs, match feeder rod, and baitcasting reel is just not going to cut it for this style of carp fishing.

Selecting a fly rod is far different from selecting a normal fishing rod, and the process can be slightly more complicated. As well as lengths and actions, the main thing you’ll need to be worried about is the “weight” of the rod.

No, this doesn’t mean the actual physical weight of the rod but the category of #2 up to around #12. These weights, which are represented by a # than the number in most cases, refer to the lightness of the rod and the situations it will be best used in.

Rods of about #2 to #4 are most commonly used for streams and brooks where casting far is not required, and the fish you target is relatively small, under around 1lb.

I’m sure you’ll know that this won’t cut it for carp fishing. You’ll rarely be catching much fish below 1lb, and it shouldn’t be too uncommon to be hooking into fish reaching the 10lb mark.

#5 and #6 rods are most commonly used for smallish rivers and small still-water venues and are good for casting light flies at decent distances with some finesse so as not to spook nearby fish.

A #6 rod would be not too bad for casting carp flies at cruising fish, but the fight might just be a bit unmanageable as these rods are still usually pretty light with a lot of flex. By all means, if you hook a decent carp on a 6 weight rod, you’re going to be in for some fight.

#7 or #8 rods are probably the best suited for carp angling with flies. They provide a decent balance between finesse and casting small flies distances with enough power in the blank to fight carp of all sizes.

Now, you’re going to need a reel. Fly fishing reels also come in weights that must match your rod for perfect balance, which allows you to cast out your new line, which is also rated.

If you’re opting for a #7 rod, then the reel and the line must match. Once you know which rod you are going for, then picking a reel and line should be pretty straightforward.

When fly-fishing for carp, you’re most commonly going to be fishing off the surface, so a floating line is what you should be opting for. We’ll get more into the approach in the section below.

The line for flyfishing is extremely important and far different from the usual monofilament, braid or fluorocarbon lines typically used for carp fishing.

These lines will be weighted differently in the same manner as your fly fishing rod.

You must pair your rod with the same weight as the fly line to ensure the line travels effectively through the eyes and utilises the weight of the rod to strip the line from your hand.

Floating will float on the surface, intermediates sink slowly at varying rates, and sinking lines will sink faster than intermediate lines.

Typically for fly fishing for carp, a floating line is what you’ll be looking for to target any feeding carp on the surface.

Approach for Targeting Carp On The Fly 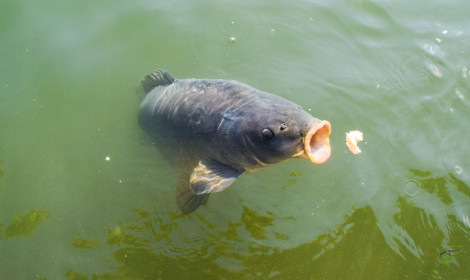 Although carp are generally bottom feeders and will spend a lot of their time looking for anything edible on the bottom, they will come to the surface to feed in certain conditions.

They may be feeding on emerging insects, berries or organic matter blown into the water or sometimes they may just be spending time in the warmer top layer of water during long periods of warmer weather.

Typically, the carp are more likely to be found on the surface in the summer on clear sunny days when air pressure is high.

The best time to try and target carp on the fly is, without a doubt, during these times when the carp are most likely to be on the surface.

Targetting carp on the fly on the surface is generally very similar to the methods used to target surface carp with the conventional rod and reel setup.

If you can find carp feeding or swimming on the surface, then the best approach is to try feeding them with free-floating bait such as bread or dog biscuits.

Start by throwing a few freebies out to the carp and watch how they react to the bait.

They will commonly investigate the bait and, in many situations, start feeding.

If they begin to feed comfortably, keep feeding them small pieces of dog biscuits and bread.

Then you’ll want to cast your floating imitation fly over the fish gently as not to spook fish.

A long leader can help in this situation as the fluorocarbon tied to the end of your fly line should land much more gently than the main body of the fly line.

If you cast past the fish, give a few strips to bring your floating fly into the middle of the feeding fish

The process is fairly simple, and the main challenge is getting to the body of water when the fish may be swimming on the surface so you can target them this way.

Although not the most common, you can target carp further down in the water if they’re not feeding or swimming on the surface.

As i mentioned, this will include an imitation fly to imitate natural food sources of the carp in the water, such as insects or pupae.

Nymphs and buzzers used for still-water trout can also work for carp.

For this, you’ll want to fish a slow sinking intermediate, usually with three flies tied to your leader.

Cast out into the water and then very slowly retrieve the line in a figure of 8 fashion to try and mimic the very slow-moving movement of these natural food sources.

Long strips and then a long pause to let the flies sink and then repeat can also be a good way to mimic the natural movements.

Carp can be caught on a fly rod, and if you’re an experienced fly angler can be a great change of pace from the usual sport fish.

Catching carp on the fly is generally similar to surface fishing tactics on conventional rods and reels.

By finding surface-feeding carp, feeding a few floating freebies and then casting to them with a floating fly that imitates these freebies, you have a good chance of getting into some carp on a fly rod.

IIf you struggle to find the carp feeding on the surface, you may want to try some of the mid-water fish styles for catching carp on the fly.