What Do Pike Eat? – UK and the USA 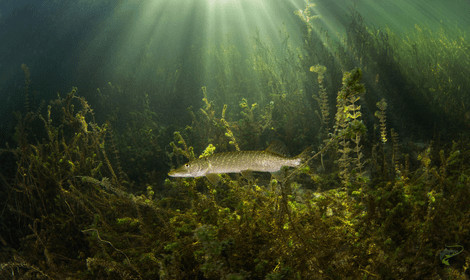 As the winter approaches, many carp and other coarse anglers may hang up their match gear and bring back out the pike fishing gear for another winter targeting the apex predator in the water.

So carp venues may even allow you to target the pike in the water over the winter when carp fishing slows down considerably.

Pike, like carp, grow to enormous sizes, and it’s not uncommon to find fish over 20 pounds in carp venues, public waterways and basically any reasonably sized body of water.

They are known for their hard-fighting qualities and can also be a challenge to catch in the winter when they are more sluggish and less likely to be chasing lures.

If you’re planning to catch these fish, then it pays to know what their natural diet consists of and what baits they are most likely to take.

So, what do pike eat?

Before I begin, it would make sense to clarify that there are a few types of pike across the world, and what they eat naturally will differ depending on where they are found.

The northern pike can be found in the UK, Ireland, most of Eastern Europe and also as far as Canada and the United States.

In the UK, the northern pike is the only pike you will come across, but in the United States and Canada, there are a few pike species that you may find yourself hooked into.

The musky is the most common of these, which thrive in the large bodies of water of North America, where you can find both the muskie and the northern pike swimming together.

Due to these two pike swimming together, you may come across the tiger musky in North America, a hybrid offspring of the northern pike and muskie.

These fish will generally be sterile, so they are not the most common pike to come across.

There are also a few types of “pickerel”, which are much smaller than the northern pike and muskie but inhabit many of the same waters in some parts of the US.

What Do Pike Eat?

Right, now that we know that there are multiple types of pike across the globe and variants of some of these types of pike, then I’m sure you can imagine that they are going to consume slightly different diets.

One thing to note, all these types of pike are predatory fish and will consume other fish and other live animals that inhabit the water.

So the diet of this pike may be considered the same, but the type of fish and animals they consume will differ with where they come from and what other native species inhabit the water. 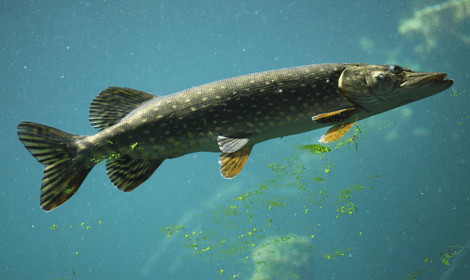 Northern pike is found in many places across the world, including the UK, Europe, Canada, United States, as well as other places.

As I mentioned briefly, their diet consists of any fish they can hunt in the water, as well as frogs, large insects, newts, small waterfowl, and even snakes if they are present in the water.

Northern Pike will feed on fish anywhere up to half of their body weight and are known to be at the top of the food chain in the waters that they swim within.

In the UK, the fish they will commonly feed on are European perch, road, rudd, chubb, small carp, minnows, small tench and sometimes even smaller pike.

In the US, they will feed on native fish species of the US, including bass, various types of small carp, sunfish, walleye, yellow perch, suckers and any other smaller fish they can get their jaws on.

Young pike will feed on smaller fish species and typically insects in the water until they grow large enough to chase down larger fish species. 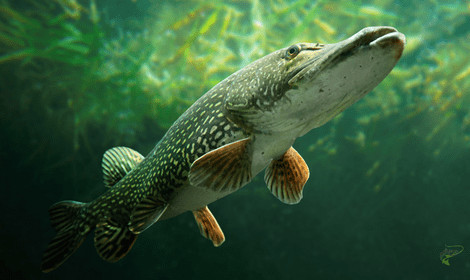 Muskies essentially have the same diet as the Northern Pike, but since they are not found in the UK, they obviously will not feed on native species of the UK.

As they are native to Canada and the US, they will feed on the same native fish species as the Northern pike that you find in the US and Canada.

These include bass, various types of small carp, sunfish, walleye, yellow perch, suckers and any other smaller fish they can get their jaws on 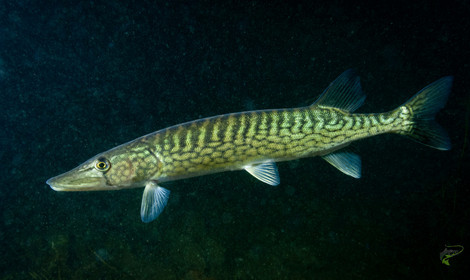 Pickerels are another variant of the pike that are found in the US and inhabit the same waters as the Muskie and native Northern Pike.

Pickles are generally a lot smaller than muskies and northern pike, but they are still predatory fish and will feed on similar fish.

As they are a good bit smaller than muskie and pike, they will tend to consume smaller native fish species, including sunfish, bullheads, shiners, and some studies have even found that they commonly feed on crayfish swimming in the water.

I mentioned briefly that pike is sometimes even found to eat waterfowl swimming on the top of the water. So what kind of waterfowl do they actually eat, and do they consume large birds?

Depending on the size of the pike, they will not commonly prey on large adult birds such as ducks, but any ducklings on small offspring of these waterfowl can become a decent meal for pike.

It is not uncommon to find pike swimming in the shallows waiting for these small juvenile birds to take to the water where they spring from below.

If the pike is large enough, they may occasionally prey on larger birds as long as they are small enough and less than half of their body weight.

Some anglers believe that they may manage to hook into pike when fishing for coarse species such as carp, but this is not the case.

Usually, anglers will fish with boilies, pellets or sweetcorn for carp, which don’t make up the diet of pike.

Pike are primarily carnivores and will not feed on natural ingredients used to manufacture any of these baits.

Do Pike Have Predators?

Generally speaking, all pike species have no natural predators once they are in their adult stage.

That being said, larger pike species will have no problem eating smaller pike of the same species if they feel that they will be an easy meal.

As pike grow, they do need to watch out for predatory birds that may be flying above the water looking for any fish they can pick from the water.

These birds include cormorants and osprey in the UK and species of eagles that are more common in the UK.

So although they generally don’t have any predators swimming in the water other than their own species, they do run the risk of being picked from the water by predatory birds.

What Fish Do Pike Eat Most?

Generally speaking, pike will feed on the most common fish species in the water column.

In the UK, it can be common to find large shoals of perch or other coarse species swimming in the water, so typically, perch make up the largest part of the pike’s diet in these circumstances.

However, if another type of fish is more common in the body of water they swim in, then these will be the most common fish that the pike eat.

Pike will eat any fish species that they can get their jaws on, and due to this, the fish that they eat the most is the one that they come across the most often that will differ depending on what body of the pike resides within.

What is the Best Bait for Pike?

We’ve now established that pike are predatory fish and the most common food source for these fish is other fish species that share the water.

Due to this, it’ll be no surprise that the best baits used for pike mimic smaller fish in the water or are dead baits of the fish they commonly consume.

In some places, live baiting is allowed, which means you can attach a live small fish to your hooks that will move and swim like an injured fish in the water bringing in the predatory pike from the surrounding.

As you can imagine, this can be an extremely effective method for catching pike, but in the UK and some states of the USA, it is prohibited and is illegal.

Due to this, the most common methods for catching pike are dead baits (dead fish) and imitation lures and baits.

As i mentioned before, dead baiting is one of the most popular methods of catching pike.

This fishing style is usually done by hooking whole small dead fish onto large trebles hook and suspended under a large float in the water.

You can purchase many types of dead baits from tackle stores and even the fishmongers, but there are a few that stand out and are most popular amongst serious pike anglers.

The fresher the fish is generally, the better it will be at enticing hungry pike into taking your bait.

Sardines are a favourite amongst pike anglers, and the pike will have no trouble getting their jaws around one if they come across them in the water.

They are oily and soft-skinned fish and release their oils into the water, which can be great at attracting pike.

Also, the fact that they are soft-skinned makes it easier to get your hooks through the fish, and if a pike takes the bait, the hooks will easily pierce through the fish and into the pikes mouth, meaning less lost fish.

Roach are also a favourite dead bait for pike anglers. Roach make up a large portion of pike natural diet in the UK, so it’s no surprise they are as effective.

As pike are used to consuming roach they will be extremely accustomed to seeing these dead fish in the water naturally, making them a great choice of dead bait.

Roach have tougher skin than sardines and can last long on a hook without falling off after a few casts.

If you want to be more confident your bait is still attached when fishing, then roach could be the choice for you. 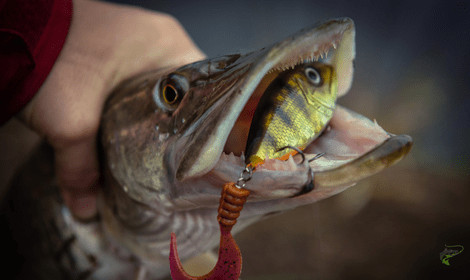 if you don’t want to use dead baits for your pike fishing, then lures can be a great way to mimic a living, moving and even injured fish in the water to entice the pike’s predatory instincts into trying to feed on your lure.

There are a few types of lures you can use for pike, including:

Spoons create a wobble and flash through the water when retrieved to imitate the movement of injured bait fish and the flash of their metallic scales in the water.

Spinners have a rotating blade with (usually) a treble hook at the back. These lures create a flash and vibrations in the water to imitate small bait fish.

Swimbaits also mimic swimming fish in the water and are often the shape of the fish they are trying to imitate. They create a natural-looking swimming motion in the water to mimic the fish that the fish commonly feed on.

As you’d expect, soft plastic baits make a jigging action underwater with a tail that moves faster depending on your retrieve speed.

All these lures can be great for catching pike in the right situation as they all are made to mimic the natural fish diet of the pike and entice their predatory nature to take over.

All types of pike are carnivores and predatory fish at the top of the food chain in many bodies of water. They feed on native fish that they inhabit the water with and other animals in the water that they can get their jaws around, including frogs and even small waterfowl.

To catch pike, the best baits you can use are either dead baits that are pieces or whole dead fish and also various lures that mimic injured or healthy fish in the water.