Panfish are generally considered to be fish that grow no larger than a frying pan, hence the name. Many panfish species also have multiple sub-species as well, for instance, bluegills and sunfish. In this post, we will take a look at the top three most popular panfish, bluegill, perch, and Crappies, their differences, and methods in which to catch them.

The bluegill is probably the most targeted fish in angling in North America due to its abundance and ease of catching. They are pursued by diehard anglers dedicated to catching the largest panfish in the world to children with snoopy poles, Zebco reels, and an empty coffee can full of worms on park shorelines and public docks alike.

Bluegill can be found in most bodies of water in the United States and Canada, from small farm ponds to the largest lakes and rivers. Chances are if you have any sizeable bodies of water close to you, it will have bluegills in it.

More recently, the bluegill has been planted in other bodies of water around the world and can now be found in Oceania, South America, Europe, and even Africa. In Japan, they escaped captivity and have become a very destructive invasive species, and such is the case in many other habitats where they have been introduced outside of their native range.

Bluegills inhabit many different areas of a lake, river, or other types of water, but can commonly be found close to shore inhabiting areas with aquatic vegetation, brush, branches, stumps, and docks.

This cover is crucial for panfish like bluegills because it gives them sanctuary from predators like muskies, bass, pike, otters, and from birds like eagles and osprey.

This close-to-the-bank nature is another reason for their high rankings in the recreational fishing world, allowing anyone to fish them from shore with minimal and cheap gear, without the need for a boat.

With the prevalence of finding bluegills close to shore, many anglers do not realize that they can also inhabit deeper water. Deeper clear water with deep weed growth can hold large numbers of panfish, especially if there is defining structure with weed growth, like mid-lake humps and ridges.

You can also find bluegills suspended in the middle of the basin of a body of water like a lake, flowage, or reservoir. These fish will travel the abyss in large schools, using sheer numbers as a protection against predatory fish.

Bluegill have flat and vertically wide bodies, and pound for pound are one of the toughest fighting freshwater fish due to their flat sided bodies and powerful tails for their size.

8 inches is considered a quality fish for table fare, and bluegills average anywhere from 4 to 8 inches with the ability to grow to 12 in some waters, with a maximum size being 16 inches in total.

Bluegill also have subspecies, like the sunfish for example, and hybrids can be found in water that feature both species.

Bluegills spawn in the spring, and when water temperatures reach a suitable level they will push into very shallow water and make small beds, clearing away debris and leaving a clean sandy circular area.

After the spawning finishes, the male bluegills or “bull” bluegills will guard the nest against other small fish and predators that try to eat the eggs. Bull bluegills despite their sizes become very aggressive when guarding their nests, and will chase off anything nearby, especially smaller male bluegills, they have even been know to attack snorkelers and people swimming nearby, but obviously don’t pose a threat to humans.

In shallow water it is very easy to spot the spawning beds, and you can see clusters of 50 or more beds in a relatively small area, this can be detrimental to bluegills, because anglers can target these fish very easily, removing and keeping the guarding males, and leaving the eggs unprotected.

When fishing during the spawn it’s important to only keep a few, and release the fish so that you don’t affect the overall health of the population from over-harvesting during the crucial spawning time.

Bluegills show very little fear when interacting with humans, and can commonly be seen pecking at people’s legs as they wade in the water, eating food dropped to them, and in rare cases even allow you to pet them. 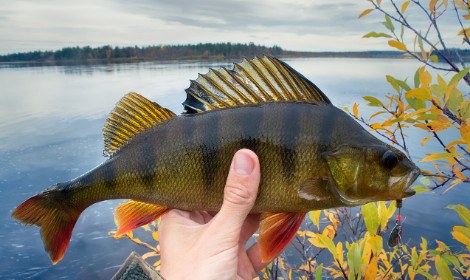 Yellow perch are very similar to European perch and some even consider them a subspecies, with very few morphological differences, for instance with some differing colouration and markings, with the European perch growing a little larger as well.

Yellow perch are also an incredibly popular species with anglers, and while they do crossover and can be caught in the same areas as other species like bluegills and crappies, they do have different habitat preferences and behaviours.

The yellow perch, in particular, is only found in North America, and is native to the Arctic and Atlantic ocean basins, along with the Great Lakes, St. Lawrence River, and Mississippi River Basins.

With a few exceptions, the yellow perch extends south to Ohio and Illinois, throughout much of the northeastern United States and Nova Scotia, and northern regions of Canada, and is only found in a few habitats south of Ohio and Illinois.

Like other panfish, perch can be found in and around vegetation and man-made structures like docks, but they differ in that they can be commonly found in large schools inhabiting and roaming large areas of sand, or sand flats, or bays of flats void if vegetation with mud bottoms, where they prey on aquatic worms and other insects that rise from the mud beds especially in the evenings.

This habitat preference is similar to that of walleye in many ways, and when fishing for one of these two species it’s not uncommon to accidentally catch the other.

Perch can also like other panfish species be found in deep water, in most cases they will be found near the bottom, but can also suspend in large schools from time to time. Finding perch suspended in deep water is more common in winter than in other times of the year.

Perch are commonly found in the 7.5 inch range, but its not uncommon for anglers to catch them over 12 inches in length, and the largest known specimen was 20 inches long.

Unlike other panfish, perch do not create beds when they spawn, instead, they spawn together in shallow waters in large schools, with spawning taking place at night or very early in the morning. 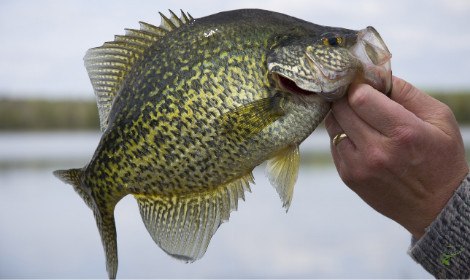 The Crappie like the perch and bluegills are considered panfish, and there are two types of crappie prevalent in the United States, the white crappie and the black crappie. These subspecies are closely related and almost the same in every aspect, with the main difference being appearance, with black crappie having much darker spots and markings and colouring shades. We will focus on the black crappie primarily in this article, but keep in mind that much of the information will cross over between the two.

The exact distribution of the black crappie is unknown, due to it being transplanted across North America. It is believed that the black crappies native range is the same as the white crappie, which is the eastern United States and Canada, also being found throughout the Great Lakes Region.

The black crappie has also been introduced in Mexico and Panama, along with now being found in 48 of the contiguous United States. ‘

Black crappie inhabit lakes, reservoirs, rivers, and most bodies of water in their distribution areas, and can be commonly found in slack water and navigation pools of large rivers like the Mississippi.

These fish can be found suspended in deep water basins regularly, more so than other species like perch. And can be found as deep as 50 feet in some cases. In the winter months crappie can be found in these deepwater areas in schools, constantly cruising the depths for schools of small minnows to feed on.

Crappies mature at 2-4 years of age. In warmer waters, they mature faster in their first four years of life. White crappies actually have a higher growth rate in terms of length than black crappies do.

The average size of black crappies is anywhere from 4-8 inches, but can be found and caught in lengths of up to 14-16 inches.

Breeding seasons can vary by location due to the wide range that the fish inhabits, but spawning will typically occur in the spring or early summer.

Crappies like bluegill make beds to lay their eggs by removing debris with their tails or mouth and can be found in bays with mud, sand, or gravel bottoms in 1-6 feet in depth.

They seek to make these nests in the most protected areas, such as timber or with large amounts of vegetation.

Like bluegills the males watch over the nest after the eggs have been laid and spawning has been carried out, warding off any potential threats and other crappies.

After the fry have hatched they are translucent and will stay in the nest for several days before moving into shallow and sheltered waters.

Fishing for any of these panfish can be as simple as throwing a worm on a hook and casting from shore, and is one of the reasons for their popularity even for novice anglers.

Fishing in this method may only produce smaller fish with a few larger specimens thrown in, for some anglers, fishing for these fish off shore and away from the bank can produce quality sized fish, but as with any species, it takes time, effort, and knowledge to catch quality fish consistently of any species.

When it comes to crappies and perch, minnow imitations or using minnows for live bait can work very well, and at times better than worms or insect imitations.

While minnow presentations can work for bluegills, it’s typically on productive in the larger trophy sized fish, as their mouths are very small and smaller fish will struggle to catch and eat things larger than fry sized prey, so your best bet with bluegills is to use soft plastic insect imitations, or live bait like worms, nightcrawlers, wigglers, or wax worms in the winter months.

Crappies and Perch will also respond well to small crankbaits of various types, with large crappies even biting crankbaits that are larger in size and used to catch largemouth bass.

Ice fishing in the winter can be a very good time to target panfish, and small insect imitations or live bait on tiny jigs can be incredibly productive during this time.

Many anglers have a misconception that they should release the mid-sized and smaller fish and keep the large ones. While this practice is fine if you only keep enough large fish for a meal, this can cause serious damage if you’re keeping your limits on a regular basis, particularly if it’s from the same body of water.

Due to the popularity of catching panfish, this can create anglers jumping from one lake to the next in search of the larger fish after they have been removed from a lake, and it may be years before the average size rebounds again, which in turn attracts crowds of anglers, and the cycle repeats.

Panfish are great, they allow people who don’t fish very often or have much knowledge about fishing to catch them and enjoy fishing like the diehards, and offer great table fare as well. And although all three of these species will inhabit the same areas, they also have preferential habitats, which allows us to seek out each specific species, and even target large specimens of each.

If you’re interested in finding out about other fish species then take a read at the following posts;