Why Do Trout Jump Out of the Water? – Splashes and Rises 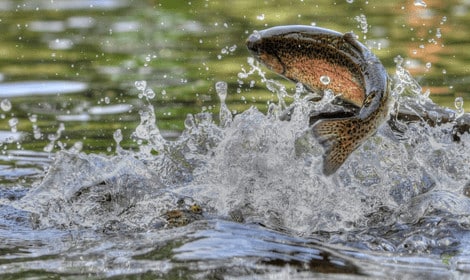 Trout is no doubt one of the most popular sport fish in the world, with anglers targeting them in rivers, lakes, small streams, large lakes and, of course, fisheries across the world.

With their hard-fighting nature, fly fishing techniques used to catch them, and of course, the fact they are a popular food worldwide, there’s no surprise they are so popular to catch.

To become a good trout angler, you not only need to learn the baits, tackle and tactics but you must also build up an in-depth picture of their behaviours.

It is a common sight to see trout jumping from the water no matter where you are fishing, but a lot of people, have no idea why they do this and how it can influence their fishing approach.

So, why do trout jump from the water?

Why Do Trout Jump Out of the Water?

When it comes to why trout jump, there isn’t one simple answer. There are many reasons why trout jump from the water, but they should all make perfect sense once I explain them all.

One of the main reasons that trout will jump from the water is as a cleaning method similar to that of carp.

As trout feed and swim along the bottom, it is common for them to gather some silt and debris in their gills as they intake water through their gills for oxygen.

As this debris builds up in their gills, they can sometimes be seen leaping from the water, which passes a large flush of water through their gills and flushes out any stuck debris.

Unfortunately, this is going to have no impact on your fishing approach, and there is nothing much you can do other than watch.

That being said, though when fly fishing or any other trout fishing for that matter, you should always cast to jumping or rising fish in the hopes they are after a quick bite after clearing their gills.

Trout, like almost all other fish, have swim bladders that they use to maintain buoyancy in the water and allow them the swim at varying depths.

This is an internal gas-filled organ that they inflate and deflate to control the depth at which they swim at.

If the fish is changing depths rapidly, then their swim bladder can swell under different pressure and cause uncomfortable and they can struggle to stay buoyant in the shallower water.

The trout can use a jump from the water to help force air out of their swim bladder so they can swim comfortably at a different depth.

For example, if a large pike is chasing them, they may swim rapidly upwards and leap from the water in the hopes of escaping the jaws of the pike.

This also applies to trout that are being targeted by predators out of the water, such as osprey or otters.

If you are river fishing and notice fish jumping towards small waterfalls, then I’m sure you can imagine why they are jumping here.

Some species of trout will swim upstream to spawn and during this journey will encounter various obstacles that they need to overcome in order to spawn.

Trout can easily jump and clear small obstacles to continue on their upstream.

If the obstacle is too large to clear, then the trout population in that area will become disconnected and separated into two subpopulations.

Some species of trout are known to be able to clear barriers of up to 13feet which is an extremely impressive feat for such a small fish in some cases.

Do Trout Jump to Catch Food?

Sometimes, trout are thought to jump from the water to catch insects on the surface or very close to the surface.

When you see more than one fish jumping clear of the water, there is a high chance that they are catching insects flying close to the surface or insects that are skating and moving on top of the water.

Trout will try and catch insects on the way up and any insects buzzing or moving on the surface will jump and take the insect on the way back into the water.

It’s usually smaller trout that show this behaviour as they’re more eager and less efficient that the older trout population.

The larger and older trout seem to have established that using all this energy to catch smaller fish flying over the water is not worthwhile.

When you see this type of behaviour, it is usually caddisflies which are very active on the surface, and you can give yourself a good chance of catching them with a caddisfly dry fly.

Also, when trout are chasing bait fish, and they move quickly to the top of the water, the trout may leave the water as they carry through with speed and power in an attempt to catch the bait fish.

Why Do Trout Jump When You Catch Them?

It is also common for trout to jump once they are hooked and the reason why is simple and fairly obvious. As the fish feels the pull and pierce of the hook they will jump and fight in an attempt to free the hook from their mouth.

When the fish jumps from the water, it can often put slack in your line, which greatly reduces the chances of the hook staying in the mouth of the trout. 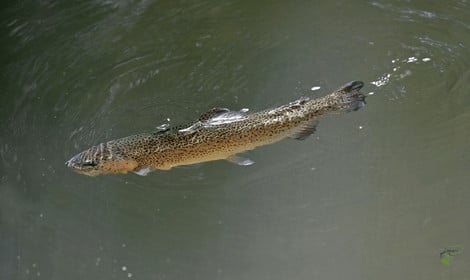 Sometimes, the trout won’t fully leave the water in an impressive splash, but sometimes they can be seen rising on the surface or leaving the water with some of their body without a full jump.

By understanding how to spot these types of rises and what they mean, you can tailor your fishing approach to take advantage of their behaviour and hopefully get a few extra fish in the next.

So, what are these types of rises, and what do they mean?

As trout take flys, buzzer shucks, beetles or any other food source floating on the surface of the water, they will often “sip” them from the surface by putting their mouth slightly out of the water.

If you see this is a great indication to move to a dry fly and mimic the food source that the trout are feeding on which will depend on the time of year, conditions and where you are fishing, e.g river of still water.

As you can imagine, this is when the trout pokes its head above the water but doesn’t quite jump.

These rises usually come hand in hand with sipping rises and indicate the same feeding activity on the surface.

This type of movement usually indicates the fish feeding on extremely small insects, and you should target them with size 18 flies.

The head poke is basically a variation of the sipping rise, but more of the fish’s head is visible above the water as they feed.

At least these are a little easier to spot and once you see this movement you may spot more subtly sipping feeding in the vicinity.

These behaviours can also be seen if the fish takes the likes of larvae or even emerging mayflies just below the surface.

This is a rise where the fish will breach the water and move sideways or even backwards. Typically you would expect the fish to come up and take fly directly overhead.

In some cases, the fish may spot something too late, turn and then make a lunge for the food.

Or if the fish spots something moving to it’s side, it may react and leave the water in a sideways manner.

This feeding behaviour occurs when there is a heavy hatch, and the flies cover the surface of the water.

The trout can then nearly sit in one location and consistently poke their head above the water, and gulp in more than one fly at a time.

This can be a great sight as the fish constantly slightly breach the water and take in many flys at once for a proper feed.

The trout will come up, gulp in food, pause for a while as they move the meal down their oesophagus and then go for another gulp of more food.

If you can pinpoint a single fish, wait for it to gulp and then, during the pausing period, cast your fly directly above the fish before it breaches again for another gulp.

There are many reasons why trout jump from the water and also a lot of reason why the fish may not completely leave the water but still breach the surface.

When fully jumping, these cases sometimes have more anatomical reasons and do not necessarily aid you in catching the fish if they are cleaning their gills or trying to rid themselves of parasites.

On the other hand, if you spot anymore of the subtle rises, then it can pay to cast to these fish as they feed on the surface or just below the surface.

By having an understanding of these rises then, you can give yourself a better chance of getting some extra trout in the trou.

I hope this has helped and is valuable knowledge to you. If you have any questions, don’t hesitate to leave a comment below.