What is a Spomb? – Which brand is best? 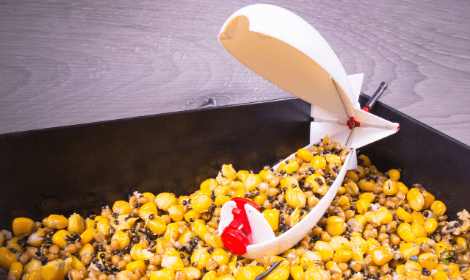 Due to these spombs being massively different to other fishing techniques I’ve found it extremely common for people to ask “what is a spomb?”.

I’ve written this post for all you spomb and carp angling new comers so you can fully get to grips with this fishing technique.

In this article we will talk about spombs, the differences between spombs and other similar tools like spods, and how to use them effectively.

Spombs are, well, a bomb essentially. Minus the explosion part.

They look like bombs in that the shape and fins are exactly what you think of in terms of a bomb. It’s hollow, where angler’s place bait such as small pellets or boilies inside of the chamber.

A spomb has a hinging mechanism that’s set to trigger open via a button on the nose of the spomb. Like a real bombs primer, when a fully loaded spomb hits the water, depressing the button it opens the bomb up, releasing all that carp munching goodness into the water and bottom below.

Anglers can then reel the spomb in and repeat as many times as necessary, laying down a nice bed of bait for the carp in precise areas to be followed up by a rig that’s meant to catch and hook the carp, while pulling in carp from all over the immediate area.

If you want a full explanation of the spomb and it’s mechanisms then take a watch at the video below.

Differences Between Spombs and other Baiting Tools

We already touched on the main features and working of spombs and how they deliver bait with a mechanism that activates upon hitting the water with force, emptying the contents. There are other types of bait delivery tools which are somewhat similar but function differently, let’s take a look at those. 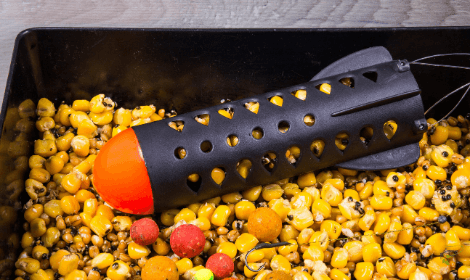 Spods have an open end on one end of the device. When you throw out a spod loaded with your bait, the nose end which is buoyant flips up, putting the open end to the bottom and dumping your bait.

Spods are usually bigger than spombs and can typically deliver more bait in one cast. While you can deliver more with a spod in most instances, it takes longer for the bait to exit the spod itself, whereas with a spomb all the bait evacuates immediately.

Spods should not be used in shallower water, for smaller amounts of bait, or in short distance casting situations.

If you want learn more about then don’t worry, I’ve already written a full length post of spods.

Air bombs are designed to open before hitting the water. When you cast a loaded air bomb and engage your spool, the release mechanism opens the bomb and the momentum sprays the bait in a shotgun pattern.

This has some advantages, the bomb doesn’t splash loudly in the water potentially spooking fish, with the bait ejecting and flying 20 feet ahead of the bomb which lands empty and silent before retrieval.

Air bombs are great for casting bait just out of reach of your maximum distance. It’s also great for shallow water and lowering the chances of spooking wary fish, particularly in pressured waters.

How can Spombs Help You in Fishing

The obvious advantage of spombs is the delivery of bait in large quantities on a feed swim for carp in a given body of water. After you spomb accurately in a small area you can follow up with your actual rig presentation to catch the fish.

This will bring in fish from the surrounding area as well as hold them in the small area of bait, keeping them close to your hook for extended periods of time.

One tip is to use a marker rod to ensure accurate placement of every spomb cast. This can be tough depending on distance and wind, but hopefully you can keep all of your spomb casts in a 12×12 foot square.

You should also be careful not to over bait your areas you want to fish, or spread out the bait over a wide area, this will make it difficult for you to actually get your bait eaten due to the wide area of food available due to casting inaccuracies.

If you are having struggle to cast accurately then follow these 9 tips.

Using spombs and spods alike require some specialized fishing gear. Spod rods are made specifically for the task, and that task is accurately casting very heavy spods or spombs long distance.

This means they are long and can cast immense loads. A good spod rod will have something around a 5 pound test curve, you want them longer as well for ultimate distance. 12 feet in length is a good spod rod length for getting your bait way out there.

A rugged reel with large line capacity is also needed. In the case of spodding we also recommend using braided line, in the event you were to get caught up on something or wrapped up, your line won’t break causing you to lose your line.

There are times when spombs are ideal to use, as well as times when conditions might not be perfectly suited for spombs. Let’s take a closer look.

Using spombs are great if it’s a very long distance to the target area. The key to spombing is to cast in a high arc to ensure that it hits the water nose first, releasing your goodies.

Areas where there are lots of fish are great for spombing, if you’re in a high fish concentration area you can deliver lots of bait to hold them there along with your actual hooked bait.

Long sessions on the bank are great for spombs, it’s incredibly quick and efficient to throw out bait whenever needed with spombs with very little hassle and upon release, cover a more precise area compared to spods.

Deep water situations are also preferred areas for spombs. The way a spomb releases its attracting bait is in a much smaller area compared to spods, which have a tendency to cover larger areas.

This means you can spomb an area precisely multiple times without making your bait area too large, even in deeper water.

Popular Spombs On The Market

The Original Spomb to come to the market, and giving the name to the tool and technique of spombs and spombing. The original spomb is still very popular among carp anglers, as are most innovative pieces of gear that hit the scene and changed the carp fishing world dramatically.

The original spomb is very easy to retrieve after the cast, and even better if you add the spomb float to the end of the tail. There are a couple grievances with it, albeit minor.

The plastic feels a little of the cheaper and less durable, and like other spombs on the market, there can be a tendency to get bait stuck in the triggering mechanism, which then requires minor cleaning. 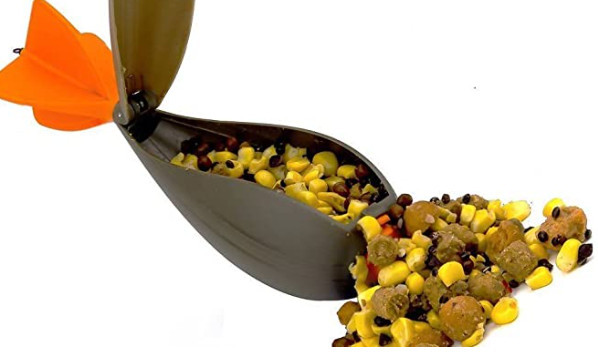 The Spomb by Fox is a great spomb to choose. Its hatch isn’t completely symmetrical, and allows you to easily scoop bait in like a shovel, making it great for long sessions on the water where you might be doing a good amount of bait placement.

It is a bit heavier than the original spomb, but on the flip side can hold more bait than the original. The Fox spomb also has larger fins making for very good accuracy due to more stable flight.

One downside to the asymmetrical design after opening is it has a tendency to walk to the side on the retrieve on the surface, which is honestly pretty minor when comparing it to the benefits.

The Spider takes a very unique approach to spombs and I gotta say, I like it. It uses magnets to hold it closed and features a flat nose, upon contact with the water it doesn’t hinge in half but in quarters with four sections opening, giving a quick and effective bait release quickly.

The magnets are pretty strong and can even effectively carry sloppy bait presentation and even liquids. Although with liquids there will be minor leakage, so you have to be relatively quick in your baiting. The flat nose makes it a little less aerodynamic than other models, but it’s still accurate enough to consistently place bait in a small area.

The Dot spod has been widely used by fishermen in Europe for a while and is now distributed in the U.K. by Nash. While the plastic quality seems fairly low, the trigger and hinging mechanism works, and the overall build quality is superb.

The Dot is also the most aerodynamic spomb out there as well as having the best retrieval after deployment, coming straight back with no wandering.

Spombs and other tools like it have revolutionized carp angling in many ways. They increase the catch rates for anglers, allow for long distance casting and bait presentations, and draw fish and hold them in an area, maximizing the chances for you to be successful.