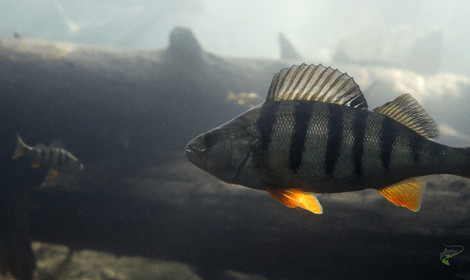 Perch are an extremely common course fish in the UK that can be caught in rivers, small streams, lakes, ponds, reservoirs, canals and nearly all (mainly) lowland water within the UK.

Perch are not huge fish but put up a great fight for their small size.

Currently, the world record stands at over 8 lbs but catching a perch in the 2 or 3 lb range is a great catch.

Anglers can fish for perch with a simple fishing tackle, and all you need is a drop shot rig with a worm or even a mepps spinner.

Since the European Perch is so common in the UK and can often be caught by anglers fishing for carp, other coarse species, trout, salmon or other sport fish.

So, what do perch eat?

What Do Perch Eat UK?

Perch are predator fish and carnivorous fish and eat many living food sources swimming in UK waters. Some foodstuffs such as worms, crustaceans, insect larvae, and molluscs are similar to the diet of other coarse species such as carp.

But, unlike carp, perch will usually only eat living organisms and have no interest in feeding on aquatic vegetation or algae and usually won’t touch carp baits that they might come across in the water.

As perch are predator fish, they feed on smaller fish and have even been known to hunt for small fish, sometimes even in shoals.

Shoals of perch may also work in groups where they try to flush groups of insects or smaller fish out of weed beds and other hiding spots so they can pick up an easy meal when exposed to open water.

So, what exactly do perch feed on in UK waters?

Smaller fish, including roach, dace, minnows, and sometimes even smaller perch, any fish fry they find swimming in the water and generally any other smaller fish they can fit in their mouth and manage to catch.

Freshwater crustaceans are also a part of a perch diet in the UK. Crustaceans are creatures with a hard exoskeleton which usually includes crayfish, shrimp and crabs.

These aren’t overly common in UK freshwater, but some waters hold freshwater crustaceans on which the perch can feed.

These include the Gammarus which is a freshwater shrimp found up and down the UK, usually in flowing water, but they can also be found in some still water.

There is also one species of native freshwater crayfish in the UK which inhabits small freshwater shallow streams.

The American signal crayfish is also present in some waters in the UK but is threatening the white-clawed native crayfish population.

Water slaters are another crustacean in the same group as woodlice. They look fairly similar but will spend their time wandering around the bottom of ponds feeding on algae and debris.

Molluscs also make up a part of perch’s natural diet in the UK. Molluscs are generally soft invertebrate animals that are usually enclosed in a shell.

These include water-dwelling snails and clams or mussels.

There are around 40 different types of water snails inhabiting UK freshwater areas, so these molluscs can be a common food source for the Perch in the UK.

Some of these snails are tiny at only 3-4mm across, but there are also much larger snails, such as the “Great Pond Snail” which can measure up to 4cm across and provide a far more substantial meal for the perch.

The UK is home to six native species of freshwater mussels, with one of them being extremely rare.

The extremely rare “Freshwater Pearl Mussels” are present in select rivers across the UK, but due to their rarity, are heavily protected.

The other mussels are more common and can be found in rivers, streams, canals, lakes and ponds.

Large perch may fancy their chances at eating these mussels if they come across them but their hard shell may prove difficult.

There is also many types of worm swimming in UK freshwater that perch will happily feed on when they come across them.

Insect larvae also make up a large part of the natural diet of perch.

Some of the insects that will be common are the water bug, water boatmen and backswimmers. Some of these insects are fairly small, ranging from about 5 to 15mm but their abundance in freshwater makes them a more than a suitable meal for perch.

As well as the water-dwelling insects, some flying insects will lay eggs in the water, where their larvae will grow before flying from the water.

Do Yellow and European Perch Eat The Same? 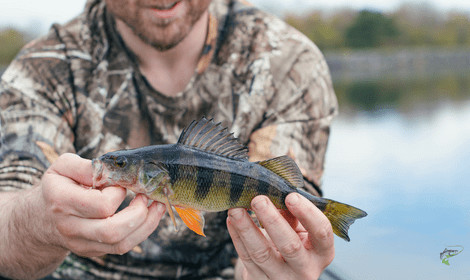 If you are familiar with other species of perch, then you will be aware that North America holds another perch species called the “yellow perch”.

Although they look fairly similar, they are different species of the “Perca” family and are much smaller than the European perch.

On average, a Euro Perch ranges from around 1.5lb and 3 lbs, with much higher weights recorded. As a comparison, the yellow perch has an average weight of 0.5 to 1lb.

Another large difference is the colour of the fish. The Euro perch has a darker body of olive and dark greens, whereas the yellow perch is lighter in colour and usually yellow or goldish.

Although these fish are different species and can be found in different parts of the world, their natural diet consists of the same classes of invertebrates in the water.

Although the species they consume may differ, they will still feed on molluscs, other fish, insects, larvae and crustaceans.

What Bait Do Perch Eat?

If you’re looking to put some perch in the net then there is plenty of bait that will work effectively. Typically, the least complex way of targeting perch is to fish with small mepps or spoon spinners and lures that can be tied on, easily cast and retrieved.

These spinners and spoons mimic small fish in the water that the perch’s predatory instincts will play on. As perch typically swim in shoals, if you manage to hook into one, you can find a few more in the area.

Fishing with worms or maggots is also a great way to target perch.

These can be fished suspended in the water on floating rigs or fish them on the bottom. Maggot feeder rigs, the same as anglers use for carp and other coarse species, can be great for targeting perch.

Many anglers will even use prawns or fresh mussels as bait for perch and swear by them for catching larger perch in the water.

You should now know what these fish eat naturally and what bait you can use to catch them.