How Long Can Carp Survive Out Of Water? – Find Out Here 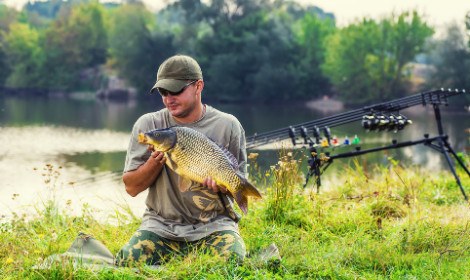 This is a common question many anglers may have asked themselves, in particular new anglers. There isn’t a definite answer, and many things can come into play as to how long carp can survive out of water. Still, the important thing is to limit the time any fish you intend to release spends out of the water and that the proper steps are taken to ensure a safe release.

Researchers have found that carp can change the structure of its gills to avoid becoming anoxic. Its blood has a high level of affinity for oxygen as well, more so than any other vertebrate.

It even can produce a tranquilizer-type chemical and produce alcohols to help it survive when oxygen levels are deficient. But the time in which a carp can survive in these conditions depends on multiple factors, with the water temperature being a critical component.

I have heard that the Dutch used to catch carp and wrap them in wet or damp blankets and keep them in the cellar for days prior to eating, but just because carp can live for days in such a state doesn’t mean that we should subject them to anything but the smallest amount of time possible outside of water for their well being.

As carp anglers, we honestly shouldn’t even wonder the question of how long carp can survive out of the water, but rather focus on keeping any carp out of the water for the shortest amount of time possible.

Even if they can survive in low oxygen environments, removing them from the water does more than stifle their oxygen intake.

Fish have slime coatings that protect them from harmful things like bacteria and infection if injured. When you remove a carp from the water, you can remove this part of this protective coating, making them susceptible to infections and harmful bacteria. This is why making sure your hands are wet when handling a fish and using the proper tools when handling them is so important.

Carp are also susceptible to gill damage if they are out of water for too long due to the gills drying out or getting covered in debris like dirt, so it is critical to limit the time out of water.

Cold weather can also be very harmful to carp, especially if the temperatures are well below freezing. Taking any fish out of the water in these conditions may allow the water on the gills and eyes to freeze and crystalize, and this will cause severe damage to the fish if they are in this situation, even for what may seem to be short amounts of time. 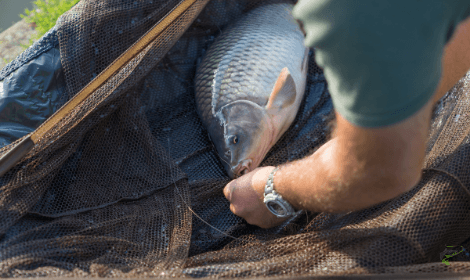 In order to handle carp in the best way possible, you are going to want to have the correct tools for the job. In modern carp angling, there are many tools on the market to aid in the process of a successful release.

Unhooking mats are a very valuable release tool for carp anglers. When a fish is caught and landed on shore, you simply lay the fish down on the mat to unhook it with the least amount of damage possible.

Just be sure to wet the mat before you use it, or you risk potential harm to the fish by removing its protective slime coating. 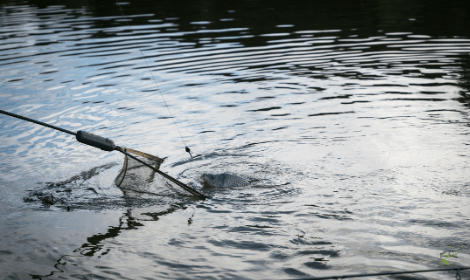 Landing nets are also crucial in safely catching and releasing carp. Without a landing net, you have to drag the carp onto the bank, risking potential bodily harm to the fish and without a doubt removing the slime coat.

With a landing net, you can scoop up the fish and quickly transfer it to a damp unhooking mat.

Be sure when you carry the fish from the water to the mat in a net that you leave your reel open to provide a slack line and that you aren’t putting tension on the line as this could pull on the hook and damage the carps mouth.

When removing a hook from a carps mouth, pliers and forceps are a must-have. These tools allow you to quickly pop out a hook with minimal damage, and it doesn’t hurt to have some long-jawed forceps and pliers to get hooks that are embedded deeper in a carp’s mouth.

If a carp has the hook incredibly deep and unreachable by any tool and if it can’t be done in a safe manner without causing serious harm to the fish, your best option is to cut your line as close to the hook as possible, while the hook will remain in the fish, over time the hook will rust or corrode and come out, this is the best chance for the survival of the fish.

In the United States, this practice is common among anglers, especially bass anglers. If a bass gets stomach hooked after rapidly eating a bait, the anglers will cut either the hook shank or the line and release it, as removal could cause serious damage and potentially kill the fish from blood loss.

While this might not seem like a release tool,  it is still important. Having a camera and tripod that is set up and ready to snap a picture at the push of a button greatly aids in limiting the time that a carp spends out of water.

Once the fish is on the mat and the hook removed, all you have to do is turn the camera on, and push a button with a delay timer, lift the fish up, snap a photo, and back into the drink it goes! 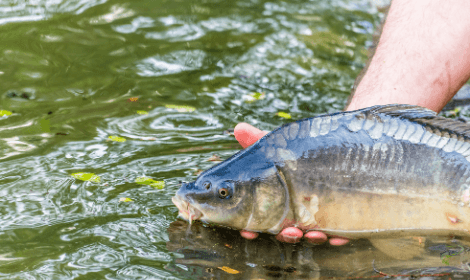 When you release a carp, you need to be sure that it’s successful. This obviously means not simply throwing the fish in the water and calling it a day.

Cradle or support the fish under its belly, and hold onto the tailstock of the fish, and let it rest in the water for as long as it needs to.

The fish will tell you when it’s ready to go back home and will attempt to kick away, and you will feel its tail tense up. This means you should loosen your grip and let the fish simply swim out of your hands.

If the rumours are to be believed in the right conditions, even a wet blanket and a damp cellar could keep carp alive for a surprising amount of time, and we know from research that carp can live in environments that other fish simply couldn’t.

This doesn’t mean carp anglers should be lax on the amount of time that a carp spends out of the water, and we should still strive to use the proper catch and release techniques to ensure it has the best chances for survival.