Do Moon Phases Affect Carp Fishing?- A Myth or Not? 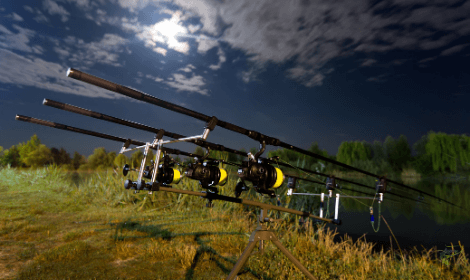 As I’m sure all you carp anglers will know, the weather plays a large part of carp beneath the surface, everything from rain, wind, the temperature and even atmospheric pressure can give you a good indication of how carp are behaving and if they are likely to be caught.

For some, the moon phases is also something that they monitor closely as they believe by fishing during certain moon phases you are far more likely to catch.

But for others, the moon phases are just a myth that have no real affect on your fishing what so ever.

What do you think?

In this post we are going to take a closer look at this to find out if moon phases affect carp fishing just like weather events and the seasons.

What Exactly are Moon Phases?

Before we get into discussing if moon phases affect carp, it would make sense to let you know exactly what moon phases are.

As the moon orbits around the earth and it’s position changes relative to the Earth and the Sun different portions of the moon are lit by the light radiating from the Sun.

There are 8 moon phases that are visible through each month as the moon take 27 days to orbit the earth.

From this simple explanation I completely understand how it is extremely difficult to imagine this alone affecting fishing what’s so ever.

Although these are the stages in which the visual appearance of the moon changes in the sky it actually has some effects on the earth .

One of these main changes being the the alteration of gravitational pulls on Earth that influence the tides. As tides are caused by the gravitational tug from the moon and the sun it is no surprise that tides vary as the moon orbits the earth.

As the moon orbits the earth tide times of high and low tide vary and the depth of tides can even change dramatically as greater or weaker gravitational pulls are present in certain areas.

On a full moon the tidal change will be greater and on a new moon it will be at it’s least.

Due to this I suppose it’s quite easy to see how this can effect salt water fishing and the marine life that comes with it.

But can this really affect carp in small commercial waters across the world? Let’s find out.

The Effects of Moon Phases on Other Fish

The topic of moon phases affecting fishing is one that is highly debated in the angling world and in some types of fishing it is fairly obvious to see why the moon phases have an impact.

For example, trout fishing is usually slower on full moons as fish feed more throughout the night in the security of darkness. Targeting migratory fish in full moon is more productive as more fish travel in high tides.

When tides are at their strongest sturgeon and striper fishing can be more productive.

Fishing for estuary fish will feed heavier on high tides and the increased flow from high tides will result in a bigger movement of bait.

I’m sure you can see in these instances it makes perfect sense why fishing can vary with moon phases and tides.

So where exactly does carp fishing fit in here? Unfortunately the answer isn’t always as simple. 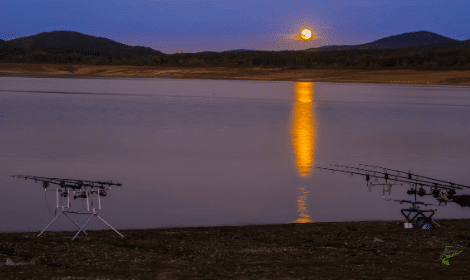 Unfortunately if the moon affects carp fishing is not anywhere near as clear cut with many expert anglers having conflicting opinions. To help give you the most clear answer possible we can take a look at some of these expert opinions to see if you think moon phases will affect carp fishing or not.

For the average day ticket carp anglers the influence the moon may or may not have on your fishing should definitely not be the difference between fishing and not fishing.

As I’m sure you are all well aware that there are plenty more variables that are proven to directly affect your fishing so I’d recommend you spent more time worrying about these than the effect the moon may or may not have.

A quick online search will flag up a lot of experienced and hardened carp anglers that claim to see a pattern in their catch rate that coincide with the moon phases.

It is believed that these anglers have caught their biggest fish on the dark nights either side of a new moon or the bright nights of a full moon. Why? We just don’t know but many claim to have seen the same pattern.

Few of these experts agree on possible explanations for these. The darker nights of new moons could provide the security of darkness to feed more comfortable. But this does not account for why the carp are said to be caught more even during the day of these moon phases.

A possible explanation for this is that more natural foods become available at this time due to insects that are influenced by the moon phases that can push the carp into some sort of feeding frenzy.

Full moons are also thought to coincide with big commons being caught. The reason? Unknown.

However, this is a trend that is backed by many anglers and not just one outlander.

Although there seems to be no concrete evidence if the moon phases directly affect carp fishing one thing for sure is that all expert carp anglers stick by the theory that they should fish when they can.

If you’re fishing moon phases or not you need to be on the banks to catch them.

Unfortunately, how the moon phases affect carp fishing is not as simple as you’d hope. Depending on who you ask the answers you receive could be the completely contradictory to the answer you received from someone else.

Some expert anglers swear by it and believe they see a blatantly obvious trend between their catch rates and the moon phases but there is just no scientific evidence to back this up. Yet.

One thing they do agree on is that they won’t avoid fishing when they get the chance even if their favourite moon phases don’t align with their available time.

It would be great to hear some of your opinions on the moon phases and carp fishing so please do leave a comment below!